Salt of This Sea

Directed by Annemarie Jacir
A sad and poignant drama about a new generation of Palestinians trying to make their way in their shackled world of loss, persecution, and anger.

Soraya (Suheir Hammad) lives in Brooklyn but for years has wanted to return to her Palestinian roots in Jaffa where her grandfather lived and lost their home in 1948 when the state of Israel was created. She yearns to visit her ancestral home and to recover the funds left to the family in a bank account. Arriving in Israel at the Tel Aviv Ben Gurion airport, Soraya is subjected to extra questioning and a full-body search. She finally makes it through these humiliating circumstances and stays briefly with a friend in Ramallah. At the bank, she is told that her grandfather's account was frozen and seized in 1948. Soraya shares her righteous indignation with Emad (Saleh Bakri), who works at a restaurant where Soraya eats. Emad has been trying to get a visa to travel to Canada where he has been given a scholarship. But this dream is shattered when, for the fourth time, his visa is denied. Furious, Emad feels like he is living in a prison. A bold plan, pulled off with his best friend, a filmmaker, enables all three of them to savor the taste of freedom and new possibilities.

Salt of This Sea is the debut of Palestinian director Annemarie Jacir, who sees the film as "a story of young people trying to shake off the restraints that control them — of military occupation, borders, a corrupt government, and a rejecting social system. It is the story of a new generation wanting to live, and knowing sometimes, in order to do this, [they have] to take things in their own hands."

Soraya and Emad arrive in Israel as homeless illegals. They decide to go on a quest to visit their ancestral homes. Soraya is heartbroken after meeting the hospitable Israeli women who allows her to look at the place and even stay for a while. But anger resurfaces in Soraya, who claims that it is really her home, created by the blood, sweat, and tears of her grandparents. Emad wants to move on, so they explore a village in ruins that he has not seen for 17 years. It is sad to see the mounting sense of loss in these two Palestinians and the disconnection they must feel from the rest of the world. Annemarie Jacir ends the film at the Tel Aviv airport, an impersonal place and space inhabited by tired, tense, and often frightened people trying to make a transition from one place to another. 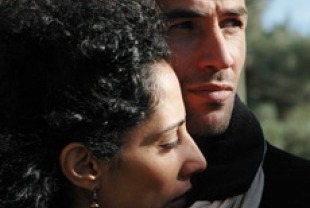