Directed by Ryan Murphy
A sensuous and emotionally cathartic adaptation of Elizabeth Gilbert's spiritual journey to personal transformation and love.

Journey is an ideal metaphor for the spiritual life. It encourages us to see our experiences as a movement towards transformation, wholeness, and holiness. Every step along the way counts because it gets us further along the path.

A spiritual journey is a quest for a greater awareness of the sacred in daily life, a deeper sense of meaning and purpose, a more vital connection to those we love, and a fuller response to our world — both its problems and its delights. As the Trappist monk Thomas Merton once wrote: "Our real journey in life is interior; it is a matter of growth, deepening, and an ever greater surrender in the creative action of love and grace in our hearts."

Throughout history, people looking for spiritual renewal have undertaken pilgrimages to sacred sites. They have set out with great seriousness and high hopes for the energizing of their faith. Along the way they have squared off against obstacles and often found spiritual companions with whom they could share their experiences and insights. Sometimes they have wandered off the established route in order to follow the dictates of their hearts. They know that where they go is not as important as how they get there. Or as writer Henry Miller once put it: "Our destination is never a place but a new way of looking at things."

Spiritual journey. Quest. Pilgrimage. All these impulses characterize Elizabeth Gilbert's wildly successful spiritual memoir Eat, Pray, Love, which was published in 2006, endorsed by Oprah's Book Club, and spent three years on The New York Times bestseller list. Now Ryan Murphy (Running with Scizzors and TV's Glee) has directed a sensuous and emotionally cathartic screen version of Gilbert's well-written quest; the screenplay is cowritten by Murthy and Jennifer Salt. Like the memoir, it is divided into three distinct parts — Italy, India, and Bali. It challenges us to participate in the journey by opening our hearts and minds to Gilbert's call to adventure, her encounter with spiritual teachers, and the breakthroughs she achieves along with the breakdowns. The film is enriched by the Oscar-worthy photography of Robert Richardson and the impressive soundtrack by Dario Marianelli that includes ballads by Neil Young, opera gems, and various other mood enhancing selections.

When we first encounter Liz Gilbert (Julia Roberts in a nuanced performance) in New York City, she is a successful journalist with a disastrous personal life. Her eight-year marriage to the sweet but vocationally wayward Stephen (Billy Crudup) has broken up but he doesn't want to get a divorce. She begins an affair with David (James Franco), a handsome actor who is a devotee of a woman guru in India. Liz feels a mixture of regret and guilt when she examines the unsatisfying dimensions of both relationships. She senses that part of the problem with both men is her controlling nature. Or is it that she too easily lets herself be consumed by a relationship? Liz is like many of us who feel inadequate to the high standards set for a meaningful love relationship. On a scale of 1 - 10, who can ever rate a 10? For some viewers, Liz will come across as a whiny and self-absorbed woman but isn't that the criticism of all those who yearn for healing and personal transformation?

After plunging into a hole of depression, Liz turns to God in prayer and asks for guidance. She fondly remembers the advice of Ketut (Hadi Subiyanto), an Indonesian medicine man who told her that she is very lucky and that she worries too much. Liz decides to set her anxieties about the future aside and take a year abroad spending four months each in Italy, India, and Bali. She decides she needs to be "unnerved," to go someplace where she can "marvel at something." In other words, she wants to transform her life. Her friend and editor (Viola Davis) tries to convince her that such a trip is nothing more than running away from her discontent and that it won't solve anything. Sometimes even those closest to us who have our best interests at heart are unable to understand our needs and choices.

Before heading off to Italy, Liz studies Italian and loves the language. It is a sign of her delight in words and her openness to other cultures. In Rome, she meets Sofie (Tuva Novatny), a Swedish fellow-traveler who is seeking adventure and love. Liz also falls under the sway of her Italian tutor (Luca Argentero) and his friend Luca Spaghetti (Giuseppe Gandini), who teaches her "the sweetness of doing nothing." He contends that Americans are an unhappy people because they work too much and do not know how to relax and let go; they know all about "entertainment" but nothing about "pleasure." Despite the delights of savoring Italian cuisine, Liz plunges into loneliness and guilt over her affair with David. She writes him and ends the relationship. As she prepares to leave Italy, Liz enjoys an American-style Thanksgiving in the company of her new friends, whom she considers to be family now. She learns that the spiritual practice of gratitude can be a healthy antidote to regret.

In the next scene, Liz is in a taxi hurtling through a crowded Indian city on her way to a Hindu ashram in a remote rural village. Much to her dismay, she learns that the guru she has come all this way to see is in New York. Liz is left to struggle with her monkey mind as she tries to meditate. While scrubbing the temple floors as a part of her seva (service), she meets Tulsi (Rushita Singh), a 17-year-old Indian girl who is upset about her upcoming arranged marriage to a rich young man not of her choosing. Liz draws close to her through the spiritual practice of listening.

Liz also proves to be a good listener with Richard from Texas (Richard Jenkins). He advises her that if she wants to get to the castle, she is going to have to swim the moat. In her case, this means trying to clear her mind, learning to forgive herself, and then letting the past go. One of the most astonishing things about spiritual journeys is the ways in which we encounter individuals who offer wise counsel because they have already been in the dark places where we are. The emotional scene in which Richard opens his heart and describes his battle with guilt contains genuine firepower.

Liz does not advance very far in India in her quest to harvest devotional meaning from the practice of silence but she does pick up valuable insights about relationships from Tulsi and Richard from Texas. She doesn't get what she wanted, but she gets what she needs. Expectations are of no value on spiritual journeys. In fact, they often prevent our seeing the epiphanies which pop up in the most unexpected places.

Liz travels to the tiny Hindu island of Bali on the last leg of her trip. She wants to find some balance between the worldly pleasure of Italy and the spiritual devotion of India. She reconnects with Ketut who wants to make her his protégé by having her copy his teachings in a book. He is pleased by the new radiance in her face and the lack of anxiety she demonstrates. Liz also meets Wayan (Christine Hakim), a medicine woman who proves to be a very important person in her emotional education.

All throughout her spiritual journey, Liz learns from women who mirror back to her reflections of herself. She sees them as soul mates and teachers who help her in the process of letting go of her worry, guilt, and inability to forgive herself for the errors of the past. Women watching them are sure to have similar moments of connection.

The last person who assists Liz is a Brazilian divorcee, Felipe (Javier Bardem), who calls his grown son "darling" and lavishes him with fatherly affection. Can a new romance be the final step in her spiritual healing? Has Liz found herself enough to be willing to surrender to love or is she still too afraid of failing once again?

In her book Crossing to Avalon: A Woman's Midlife Pilgrimage, Jean Shinoda Bolen writes: "It is no small matter to be a witness to another person's life story. By listening with compassion we validate each other's life, make suffering meaningful, and help the process of forgiving and healing to take place." The screen version of Eat, Pray, Love may not be as deep or as compelling as Elizabeth Gilbert's book but it does give many more people the chance to experience the bounties of her spiritual journey and the transformations that are possible on such a quest. 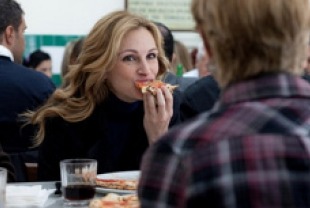 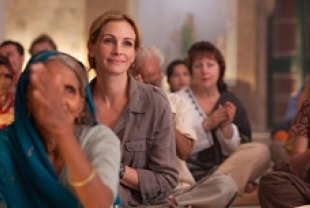 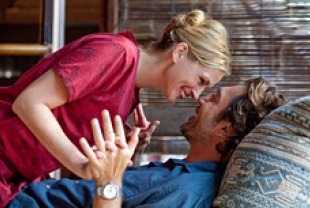