Directed by Fatih Akin
A funky comedy about an oddball restaurant owner in Hamburg whose creativity and perseverance are tested by unending setbacks.

The Soul Kitchen is the name of a warehouse restaurant in a grungy suburb of Hamburg, Germany, where the working-class customers like greasy and filling food such as burgers, fishcakes, and schnitzels. The place is owned and run by Zinos Kazantsakis (Adam Bousdoukos), a laid-back Greek hippie entrepreneur.

Things start to go from bad to worse when Nadine (Pheline Roggan), his girlfriend, decides to advance her career by taking a newspaper job in Shanghai. Zinos is upset but decides to carry on without her. Trying to improve his business, he hires Shayn (Birol Ünel), a gourmet chef who has a very high opinion of himself. The regulars at the Soul Kitchen rebel but are luckily replaced by students and their friends at a dance school next door. They love the upscale cuisine and turn the place into a hot spot where musicians practice and the customers enjoy themselves dancing.

Life is not easy running a restaurant. Zinos's life is further complicated when his brother Illias (Moritz Bleibtreu), a thief, is released on parole. He convinces Zinos to give him a bogus job at the Soul Kitchen so he can wheel and deal on the side. In addition to his loneliness without Nadine and dealing with his irresponsible brother, Zinos is harassed by Neumann (Wotan Wilke Möhring), a school buddy who is now an unethical real-estate speculator determined to purchase the building where the restaurant is located. It looks as if everything will collapse when a persnickety health inspector threatens to shut down the place unless some very expensive improvements are put into place.

Soul Kitchen is a funky comedy directed by Fatih Akin, a Turkish-German filmmaker (The Edge of Heaven). who proves here that he has a keen respect for the mysteries of human personality and an appreciation for flawed and oddball characters. Zinos is a lovable entrepreneur whose creativity and perseverance are severely tested by a storm of mishaps and setbacks. We cheer him on and he proves to be a resilient urban anti-hero whose playfulness is a character quality that enables him to handle all his troubles.

Special features on the DVD include the trailer and the making-of featurette. 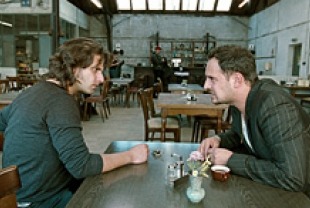