Directed by Mikael Hafstrom
A supernatural thriller with Anthony Hopkins as a seasoned exorcist introducing a young priest to mysteries of not knowing.

Michael Kovak grows up in a home that often contains dead people. His religious father Istvan (Rutger Hauer) is an undertaker who wants his son to take over the family business. But Michael decides to go to seminary instead. There Father Matthew (Toby Jones) is impressed with him and comes up with a strange proposal. Pope John Paul II has ordered the Catholic Church to train more priests in exorcism so they can do battle with the Devil. Michael (Colin O'Donoghue) decides to go to Rome to study for a year.

He's an unlikely student for the exorcism course. He is a firm believer in therapy as the chief means of treating mental illness. He puts his faith in science and reason for explanations of severe problems rather than belief in the Devil. When Father Xavier (Ciaran Hinds), his teacher, learns of Michael's doubts about the Vatican initiative, he sends the young priest to see Father Lucas (Anthony Hopkins) who has performed thousands of exorcisms.

The old and battle weary Jesuit decides to take his guest to a meeting with Rosaria (Marta Gastini), a young pregnant teenage girl who is experiencing demonic possession. Michael is respectful of the intensity and the focus of Father Lucas's exorcism but remains convinced that the girl should have been treated by a therapist for severe mental illness brought on by being raped by her father.

Also in his class is Angeline (Alice Braga), a journalist doing a special report on exorcism. She shares Michael's doubts about this ancient practice and is more aligned to modern science. Both of them are stunned when Father Lucas is unhinged by his battle with the Devil. He warns Michael: "Choosing not to believe in the Devil won't protect you from him."

Mikael Hafstrom directs The Rite from a screenplay by Michael Petroni suggested by the book by Matt Baglio. Although we acknowledge that there are principalities and powers at work in human nature which defy logic, we do not think it is helpful for Christian communities to return to a pernicious dualism pitting God against a Devil; this has already led to so much division and suffering in the world.

The best thing about The Rite is that it reveals Michael to be as rigid in his need for certainty and scientific proof as religious fundamentalists are in their need for certainty in their faith. There is little that is scary or surprising in this drama but Anthony Hopkins, as always, carries our interest every moment he is on the screen as Father Lucas. Why is that? Agnes de Mille provides the answer: "Living is a form of not being sure, not knowing what next or how. The moment you know how, you begin to die a little. The artist never knows. We guess. We may be wrong, but we take leap after leap in the dark." This exorcist has come to terms with his own vulnerability and the human capacity for not knowing. And the actor playing him has an uncanny ability to convey those dimensions of his character. 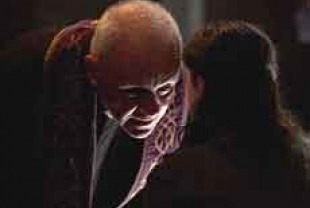 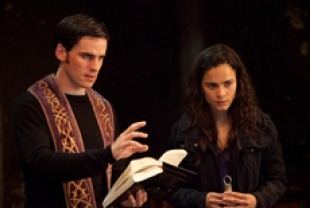