Directed by Chris Hegedus, D. A. Pennebaker
An immensely entertaining documentary about pastry chefs competing for entry into a prestigious fraternity in France.

In this immensely entertaining documentary Chris Hegedus and D. A. Pennebaker cover the 2007 finals of Les Meilleurs Ouvriers de France (the best craftsmen in France) competition held in Lyons. Once every four years, 16 chefs are chosen to spend three intense days creating their favorite pastries. The judges choose more than one winner, and these fortunate ones get to wear the unique collar which signifies their special status. The French, of course, are famous for their excellent cuisine and a chef says early in the documentary, "There are no all-you-can-eat places in France. The idea is to eat small amounts of the best food."

The filmmakers focus on three contestants giving most of the time to a Frenchman now living in Chicago and teaching as a co-founder of the French Pastry School there. Jacquy Pfeiffer is a laid-back but articulate chef who has several coaches including his partner who already is a MOF winner. His wife and daughters provide moral support for him. In advance of the competition, Jacquy goes to Alsace, his hometown, to practice for the contest which includes an exam and a rigorous list of deserts of all types which must be meticulously prepared and designed in a certain amount of time under the watchful eyes of the judges.

The two competitors from France who are center-stage in the documentary are Philippe Rigollot, a talented young man with a flare for spun sugar deserts which look like phantasmagorical sculptures, and Regis Lazard who dropped his sugar sculpture four years and is worried that a similar catastrophe might happen again.

We cannot tell you who is allowed into the prestigious fraternity at the end — that would spoil the considerable suspense in the film — but we can say that we were impressed with the empathy and the compassion of the judges for those whose sugar sculptures fell apart.

Special Features on the DVD show Chef Jacquy Pfeiffer creating a chocolate sculpture, an interview with the filmmakers, and a chocolate fashion show. 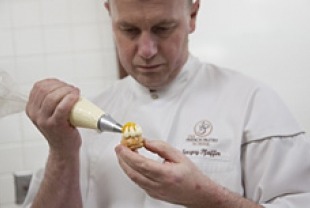 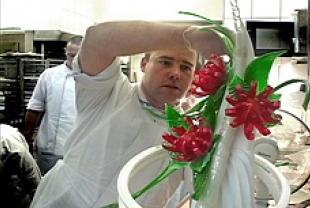 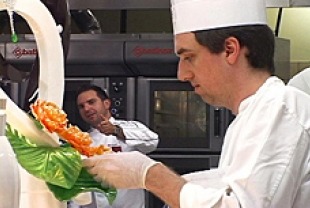 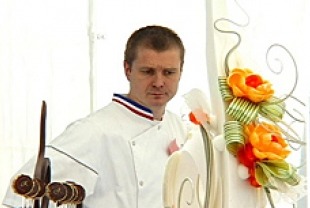