Directed by Gore Verbinski
A wonderful and immensely creative animated film about a loser who arises to the challenges faced in a town without water.

Rango (voiced by Johnny Depp) is a lonely and skinny chameleon whose old life ends when the aquarium he's been living in ends up on the edge of a busy highway in the desert country of the West. He is challenged by a wise armadillo, Roadkill (Alfred Molina), to go on a quest to find enlightenment in the Mojave desert, a place of mystery, merciless heat, and incredible dangers. His life is so empty that he decides to take up the challenge.

In this wilderness, Rango encounters a fierce hawk who scares him into hiding in a pipe; later a sudden rush of water sends him shooting out into the desert. There he meets Beans (Isla Fisher), a lizard who owns a ranch that is failing due to the lack of water in the region. She's very suspicious about the water she's seen being dumped. She also has a strange habit of freezing up when she get severely agitated. Beans gives Rango a ride into her hometown of Dirt where the townsfolk are all subservient to the mayor (Ned Beatty), a tortoise. He has plenty of water and is savvy enough to know that the one who controls water, controls everything.

Rango has always wanted to be the center of attention. In the saloon, he concocts a wild story about being the gunslinger who killed seven bad men with a single bullet. When the mayor hears of his exploits, he makes Rango the sheriff. His self-confidence soars and he sees himself afresh not as a loser but as a genuine hero on a mission. One of those putting her faith in this outsider is Priscilla (Abigail Breslin), a young mouse.

Everyone in town is anxious about the lack of water, especially after the last precious jug of it is stolen from the bank. Rango and a posse of assorted animals go out to find it. Before the story is resolved, Rango also has to do battle with Rattlesnake Jake (Bill Nighy), who has long terrorized the townsfolk. Can Rango live up to the trust others have put in him, or will he cave in and fall back into his old lack of self-esteem?

Rango is a delightfully clever and creative animated feature directed by Gore Verbinski, who also wrote the original story with James Ward Byrkit. They worked with screenplay writer John Logan to capture and convey the multidimensional aspects of adventure, humor, mystery, and community in Western movies. Of course, we are intrigued by Rango's quest to discover who he really is and what he can be. Walking to "the other side," he discovers the source of courage and wisdom within himself. Like Don Quixote, he ends up wanting "to add a measure of grace to the world." From start to finish, this animated film is a wonderful questing tale that easily wins us over with its funny and vulnerable characters, zany music, and special effects.

Special features on the DVD include 10 deleted scenes and "Meet the Real Creatures of Dirt." 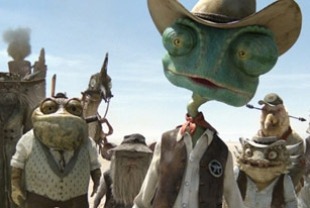 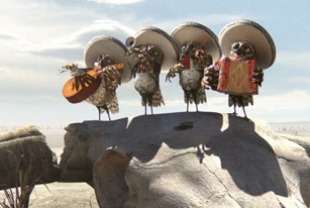 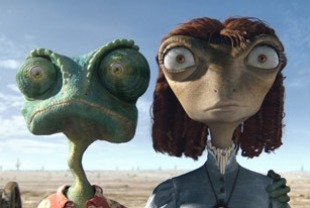 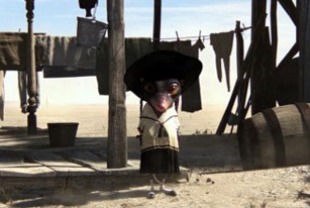