Directed by Erez Tadmor, Guy Nattiv
A romantic drama laced with the impact of Israeli-Palestinian politics on matters of the heart.

Eyal (Liron Levo) is a young man from Israel who is in Berlin to see the World Cup finals. Seated opposite him on a subway is Rana (Lubna Azabel), a Palestinian from Ramallah. While exiting, she accidentally takes his rucksack and leaves hers behind with him. It takes Eyal a while to discover the error, and he is relieved when she calls him to arrange an exchange. Before they leave for the train station, each cannot resist looking through the other's rucksack.

After meeting, Rana says that she is going to see a friend who may have access to a place where she can stay. All the hotels are filled because of the soccer championships. She invites him to tag along and see what happens. When it turns out that the available room is a large space, Eyal joins her.

He is quite shocked when Rana admits that she is from Ramallah. And she feels uncomfortable with his strong pro-Israel feelings. They both try to stay away from the subject and that works very well when they attend the World Cup finals. Their mutual sexual attraction by this time is at a pressure point, and they create their own passionate and intimate erptoc dance while surrounded by hundreds of screaming soccer fans. Then it is back to the room for more of the same.

In the fusing of their two bodies, they become one and transcend the ancient enmities that have separated Jews and Palestinians for years. But the news reports of more bombings and deaths on both sides drive them back to their rigid thinking about the other as enemy. Their interlude is interrupted when she receives a call and must return to Paris where she lives.

Israeli filmmakers Erez Tadmor and Guy Nattiv have expanded their award-winning 2004 short into this romantic drama laced with the impact of politics on matters of the heart. When the second Israeli-Lebanon war breaks out, Eyal decides to ignore Rana's request that they not see each other again since they have brought so much unwieldy baggage into their relationship. He is surprised to discover that she has a young son named Rashid (Abdallah El Akal). The boy sees him as an intruder and it is only after spending a day with him at an amusement park that Eyal feels better.

Can these two lovers from such antagonistic worlds break the cycle of hatred, blame, and violence? By the end of the film, we are wishing them well and hoping that they can find a small portion of peace and happiness with each other. 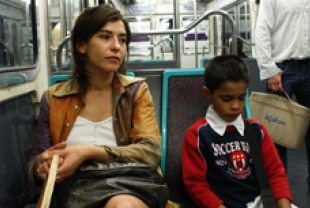 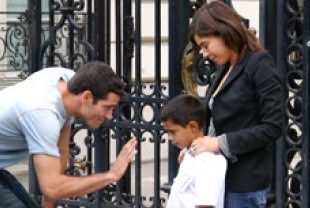