Directed by Edward Norton
A sprightly spiritual comedy which explores and celebrates our religious differences.

Would you believe that the two central characters in this modern screwball comedy are a priest and a rabbi? Here is the first film in years to present two servants of God as ardent, idealistic, hard-working, and interesting people. That's the first miraculous thing about this spunky drama written by Stuart Blumberg and directed by Edward Norton.

Jake, a Jew, and Brian, a Roman Catholic, grow up together in New York City and are both interested in each other's religion. They are also enchanted with Anna, their junior high school pal. The three kids are inseparable until she moves to California with her family.

Sixteen years later, Anna (Jenna Elfman) returns to the Big Apple as a high-powered business executive who works 100 hours a week. Brian (Edward Norton) has become a priest and is serving with Father Havel (Milos Forman) at a growing Catholic church on the Upper West Side. He speaks Spanish and has a good rapport with youth. Jake (Ben Stiller) is now a rabbi working at a synagogue with Rabbi Lewis (Eli Wallach), who is impressed with his charisma and loose improvisational style of preaching. Larry Friedman (Ron Rifkin) represents members of the temple who want the young rabbi to tone down his penchant for change, such as introducing meditation classes and bringing in a gospel choir to liven up the singing during the weekly service.

Jake's biggest worry is that his mother (Anne Bancroft) and most everybody else in his congregation want him to marry a nice Jewish girl. In fact, his future seems to depend on it if he is to succeed Rabbi Lewis. Jake surprises everyone by falling in love with Anna, a Gentile. Brian comes up with his own unusual response when he's finally let in on the secret.

Keeping the Faith has another miracle for us. It unabashedly hurrahs religious and ethnic diversity. When Brian descends into depression, he shares his story with a Sikh bartender (Brian George) who has Jewish-in-laws and inherited an Irish pub from a Catholic relative. This sprightly story ends appropriately at an interfaith senior citizen center established by Brian and Jake. Here young and old, traditionalists and modern folk share in the spirit of new beginnings.

Melannie Svoboda has written: "A healthy spirituality should lead us to celebrate our differences and to see them as a reflection of God's beneficence and creativity." The Creator loves diversity and so will you after experiencing this winning comedy! 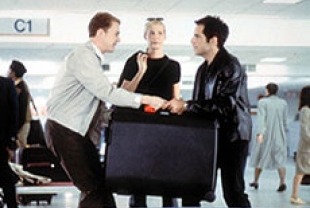