Directed by Bill Moyers, Elena Mannes
A documentary with performances of the popular hymn and comments by Bill Moyers and many others about the reasons for its continuing impact.

"Amazing grace! How sweet the sound that saved a wretch like me! I once was lost but now am found, was blind, but now I see."

Those are the words written by John Newton, the born-again captain of a slave ship in the 18th century. He later became a minister and published "Amazing Grace" in 1779. The song spoke to many new believers during the Second Great Awakening in the United States. It remains one of the most popular hymns ever written, has been adopted into a variety of musical styles, and remains a favorite across the generations.

This 80-minute documentary was directed by Elena Mannes was originally presented on PBS. Bill Moyers, the Emmy and Peabody Award-winning journalist serves as host. He ponders the reasons Newton wrote the song and talks with people about it. One can appreciate the durability of "Amazing Grace" through 24 performances of it by Johnny Cash, Judy Collins, Jessye Norman, Marion Williams, the Boys Choir of Harlem, and others.

For us, the two most moving segments of the documentary are when inmates at Huntsville Prison in Texas and the black 91-year-old director of a "Shaped Notes" choir in the South share with Bill Moyers their feelings about the liberating qualities of the hymn.

The continuing impact of this familiar hymn was evident on February 18, 2007, "Amazing Grace" Sunday, when some 5000 churches in the U.S. and Canada sang the hymn to celebrate the 200th anniversary of the abolition of the slave trade; John Newton was a mentor to William Wilberforce, the politician who steered the anti-slavery act through Parliament. The day was also intended to raise awareness of contemporary slave trade; it is estimated that 27 million people are enslaved today.

Special features on the DVD include Pure Pete Seeger, a musical portrait of the folk singer/songwriter, storyteller and activist filmed for Bill Moyers Journal at Seeger's home in New York's Hudson Valley; a 12-page viewer’s guide with articles on the inspiration for the program, the song’s lyrics, shape-note singing, and fascinating facts about the song; plus biographies of Bill Moyers and the featured performers. 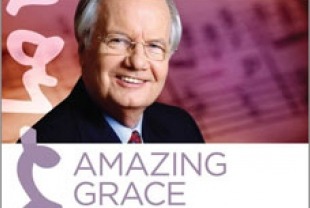