Directed by George Stevens, Jr.
A stirring one-man performance by Laurence Fishburne on the life and legal career of Thurgood Marshall, the first African-American on the Supreme Court.

Thurgood Marshall (1908 - 1993) was a freedom fighter for African-Americans and a warrior for justice whose weapon was the law. His life and legal career is portrayed in this astonishing work based on the one-man 2008 Broadway play starring Laurence Fishburne. George Stevens Jr., who wrote and directed the 1991 television series Separate But Equal, fulfills the same duties here. This HBO production was taped at a live performance at the Eisenhower Theater at the Kennedy Center in Washington, D.C.

Born the great-grandson of slave, Marshall grew up in Baltimore and inherited the family trait of stubbornness. His mother was a teacher and his father, a railroad porter who was entranced by the law and used to sit in courtrooms listening to cases. Sometimes he took his son with him, and when they got home, the two of them debated about what he had seen.

Marshall attended Howard University and wanted to become a dentist. When he changed his mind and tried to enter the University of Maryland's law school, he was denied entrance on the basis of his race. He would later plead and win a case against this odious practice. After graduation from law school, Marshall went on to become chief counsel for the N.A.A.C.P. At the core of his legal career is his contributions to the Brown v. Board of Education case which was argued before the Supreme Court in 1952 and not decided until 1954.

Marshall comes across in this film as a colorful and entertaining raconteur and commentator who has many interesting things to say about his classmate Langston Hughes; his mentor Charles Hamilton Houston; John W. Davis who argued the case for separate-but-equal schools; a strange encounter with General Douglas MacArthur whose reaction to black servicemen in Korea was less than admirable; the support of President Lyndon B. Johnson; the cavalier response of President Eisenhower to the landmark Supreme Court decision; and the fact that Supreme Court Justice Black who inducted him was a former member of the K.K.K.

Fishburne's stellar performance draws out the humanity of this accomplished crusader for freedom, his love of the abiding principles of the Constitution, his sense of humor and horseplay, his two marriages, and his patience with those who were slow to change their ways of thinking and behaving. Or as Marshall once put it: "Sometimes I get awfully tired of trying to save the white man's soul."

Thurgood ends with the old man reviewing his years on the Supreme Court and then noting how far we still have to go in race relations. A more hopeful finale comes with his recitation of a poem about America by Langston Hughes. 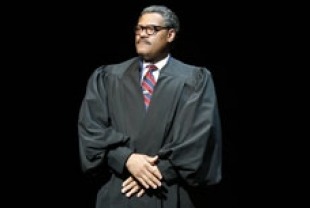 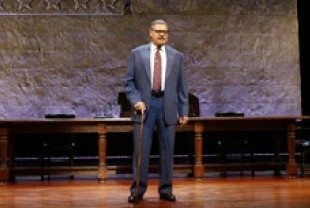