We Have a Pope

Directed by Nanni Moretti
A light-hearted comedy about the Vatican and the Papacy under pressure due to a surprising development.

The Pope of the Catholic Church has died and following the funeral, a long procession of red-robed Cardinals from countries around the world head towards the Sistine Chapel to elect a successor. Cardinal Gregori (Renato Scarpa) is the one who has the most support but anything can happen.

Outside in St. Peter's Square, Catholics from all over have gathered: young and old, men and women, families and celibate priests and nuns. They are breathlessly awaiting word about the identity of the new Pontiff and are primed to celebrate when he addresses them. Of course, the media from around the globe are monitoring every moment.

Following a few introductory votes the Princes of the Church choose Cardinal Melville (Michel Piccoli), as the new Pope. But instead of accepting the great and holy honor, he suffers a panic attack and flees from the balcony before addressing the believers in the square below. Both stunned and embarrassed, the Vatican spokesperson (Jerzy Stuhr) takes charge and calls in a psychoanalyst (Nanni Moretti) to see what can be done to calm the Pope down. When this analyst fails to get anywhere, the spokesperson takes Melville to see another shrink (Margherita Buy). She is unable to do anything for him either.

Melville escapes to the streets of the city and talks to passengers on a bus, listens to a parish priest give a sermon in a largely empty church, and winds up being enchanted with a band of actors performing Chekov's The Seagull. Is he gathering material for his next speech on St. Peter's balcony or is he getting ready to initiate a bold and innovative role for the Pope as a servant of God who mingles with ordinary people and regularly learns from them what the church should be and do? Those random thoughts ran through our heads as we watched Melville at home on the streets of the city.

We Have a Pope is directed by Nanni Moretti who was at the helm of two Italian films we liked very much: Cara Diario, a diverting entertainment offering fresh food for thought on media, travel, and health, and The Son's Room, a compelling anatomy of grief and the process of adapting to the profound losses in our lives. In this film it takes us a while to realize that Moretti has made a light-hearted comedy that is pro-Catholic and not trying to score any points against the Vatican or the Papacy. This comes across loud and clear when we hear the Cardinals praying before the vote that they not be the chosen one! The same spirit is at work when the psychoanalyst convinces the Princes of the Church to put away their anxieties and play volleyball as a release.

The inimitable Michel Piccoli does the best he can with his portrait of the enfeebled Cardinal Melville who feels more at home in the past than he does in the present moment which weighs so heavily on his soul. In that regard, his character does mirror the plight of the Vatican today.

Special features on the DVD include: Behind the Scenes, an Interactive Menu, and Scene Access. 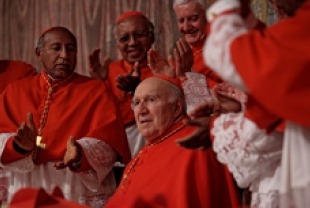 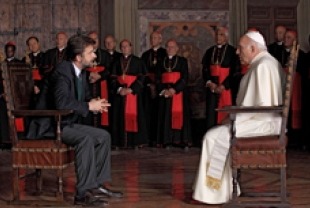 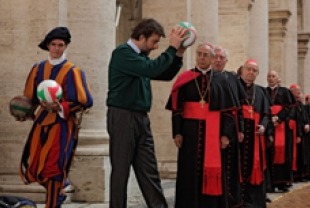 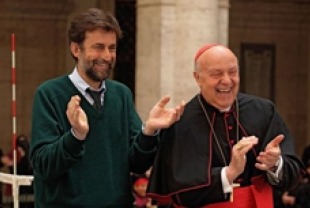 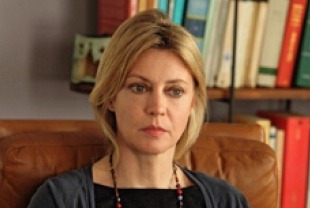