Directed by George Dunning
The 1968 animated classic by the Beatles as their declaration of independence.

Roll out the red carpet for this release of the digitally restored 1968 animated classic by the Beatles!

Here is a family film par excellence. There is something for everyone. Children will enjoy the animated cartoons; adults will be able to sit back and feel what being young was all about; and everybody will revel in the music.

Yellow Submarine is a film for all ages. The musicians who spearheaded the pop culture revolution of the Sixties proved with their creation of this animated feature that they could reach across the generations.

Entering into Yellow Submarine is something like traveling to the fantasy world of Alice in Wonderland. The Beatles take us on an engaging and inventive voyage. They depict a battle between the forces of good and the forces of evil.

The music loving people of Pepperland are conquered by the anti-music Blue Meanies. Old Fred, conductor of Sergeant Pepper's Lonely Hearts Club Band, calls upon the Beatles for assistance. Armed with songs, the Liverpool quartet make their way to Pepperland in a Yellow Submarine. On the way, they ward off dangers in the Sea of Monsters, the Sea of Time, Music, Nowhere, and the Sea of Holes. Once the Beatles arrive in Pepperland, the repression brought on by Jack the Nipper, the Apple Bonkers, The Hidden Persuader, the Snapping Turtle Turk, and the Rolypoly Butterfly Stompers comes to an end.

The Beatles don their band uniforms and sing life and love and color back into the graying land. Fourteen of their best songs are showcased in Yellow Submarine: "Altogether Now," "All You Need Is Love," "Eleanor Rigby," "A Little Help From My Friends," "Strawberry Fields," "When I'm Sixty-Four," "Nowhere Man," "Fool on the Hill," "Lucy in the Sky with Diamonds," "Michele," and "Sergeant Pepper's Lonely Hearts Club Band."

Carl Betz has written: "With the Beatles, the message of youthfulness, implicit in rock since the beginning, erupted as a dramatically explicit declaration." Yellow Submarine marks the declaration of independence of this English band who set a new standard for pop ballads by celebrating music's ability to transform life. 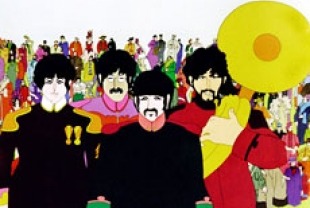 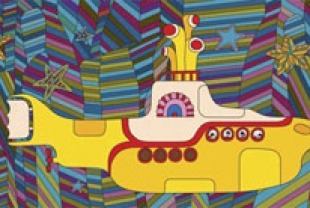 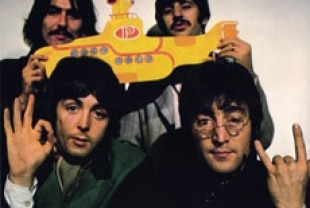