Directed by Neil LaBute
This engaging film centers on the surprising transformation of a young woman via a trauma and a soap opera.

Nothing is more crucial to our lives than the transformation of the human personality. It can happen in an astonishing number of ways and be spurred on by ten thousand different circumstances — a brush with death, a divine epiphany, a moment of awe, an encounter with the oneness of all beings. In Nurse Betty it occurs when a naive young woman witnesses the brutal murder of her husband. She enters into what psychologists call "a fugue state" of numbness, a combination of amnesia and physical fright in which the individual assumes a new identity.

Betty (Renee Zellweger) is a waitress and avid soap opera fan who lives in Fair Oaks, Kansas, with her husband Del (Aaron Eckhart), an amoral car salesman who is cheating on her and involved in some criminal activities. She is watching a videotape of her favorite TV soap opera "A Reason to Love" when two hit men, Charlie (Morgan Freeman) and his quick-tempered protege Wesley (Chris Rock), arrive at her home to talk to Del. Hearing a noise in the living room, she witnesses her husband's last moments. The intruders don't realize she is there and in a very real sense, she isn't. In a state of shock, Betty retreats to the alternate reality of the soap opera. By the time the police arrive, she is convinced that she is "Nurse Betty" who is in love with Dr. David Ravell, the heart surgeon on the series. That night, she leaves Kansas headed for Los Angeles to reunite with the man she left standing at the altar in episodes several TV seasons ago.

Soon she is being pursued by the hit men, who are concerned about what she has seen and also are after the loot stored in the truck of the Buick LaSabre she's driving. During the trip Charlie becomes as obsessed with Betty as she is with the handsome doctor on the TV show. He imagines her as "sort of a wholesome Doris Day."

With miraculous luck, Betty lands a job at a hospital and, aided by her new friend Rosa (Tia Texada), goes to a benefit attended by none other than the star George McCord (Greg Kinnear) who plays Dr. David Ravell. When they meet and Betty tells him of her great love for him, the actor is convinced that she's a mesmerizing actress trying to win an audition for a part in the soap opera. "That is just great improv," he tells her. Meanwhile, the sheriff (Pruitt Taylor Vince) and a reporter (Crispin Glover) from Fair Oaks track Betty down in Los Angeles just about the time the hit men also arrive.

Nurse Betty is director Neil LaBute's most inventive and engaging film (In the Company of Men, Your Friends and Neighbors). The clever screenplay by John C. Richards and James Flamberg operates on many levels as it explores romantic fantasy, television soap operas, and the tendency of so many people nowadays to mistake the artificial for the real thing. Renee Zellweger puts in her best performance yet as Betty, Morgan Freeman proves that he can bring dignity to any role he plays, and Greg Kinnear is appropriately vain and downright hilarious as the object of Betty's fantasies.

Similar to Phenomenon, Regarding Henry, and Groundhog Day, this comedy enables us to imagine the surprising ways in which a person can be transformed and set on a new path. Spiritual writers Jeff Zaleski and Tracy Cochran have described this kind of renewal as "something like a seed that cracks open and blooms just when the right pressure is applied." Savor the closing moments of Nurse Betty when the heroine comes into her own as a happy and fulfilled woman at peace with the world and alive in the present moment. 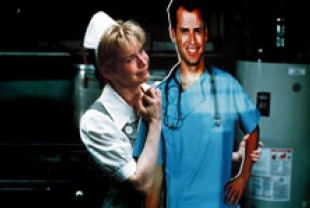