Directed by Denys Arcand
A Canadian film that satirizes the vacuousness of celebrityhood through the story of the global triumph of a supermodel.

In The Decline of the American Empire and Jesus of Montreal, Canadian filmmaker Denys Arcand displayed some of his disgust over the ways in which entertainment values have debased culture, politics, news, business, and religion. In this fast-paced and vitriolic movie, he presents a full-fledged critique of the moral vacuousness of celebrityhood and the media that supports it. Novelist Jerzy Kosinski once noted: "The emergence of celebrity is not based on depth. It is based on visibility and accessibility, a smile, a figure. It is based on appearing as a person of importance."

In the opening scene of the film, a photographer takes a picture of Tina Menzhal (Jessica Pare), a pretty young woman on an Ontario hockey team. A local modeling agency is impressed with her and soon she's working with Philippe Gascon (Charles Berling), a French photographer.

New York agent Renny Ohayon (Thomas Gibson) smells the money and takes over her career, trying to market Tina as a supermodel for the world. A restaurateur, Barry Levine (Dan Aykroyd), falls madly in love with her beauty and leaves his wife and family for her. Then Bruce Taylor (Robert Lepage), a fashion photographer, decides to make a documentary about Tina, following her around the globe in a whirlwind mix of making commercials, being interviewed on TV, attending star-studded openings, and showing up at charity galas.

At the same time the media helps make Tina a phenomenon, it also leeches away her personal life with interviewers revealing the estrangement she feels toward her wayward father, a violent encounter with Levine after she jilts him, and bedroom video coverage of sex with Gascan years ago. Worst of all is her brief but unhappy marriage to the UN Ambassador Blaine de Castillon (Frank Langella).

Stardom, which is all shot through the cameras of TV shows, reveals the shallowness of pop culture where people of little importance are treated like goddesses or royalty. Although Arcand wants us to take this drama into our consciousness as a satire, it leaves us shell-shocked at the omnipresence of entertainment values in global culture. This toxic milieu turns viewers into zombies looking for their next celebrity fix. 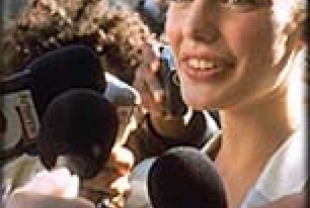