Directed by Brenda Chapman, Mark Adams
The freedom quest of a feisty Celtic princess with a jungle of wild red hair.

Merida (voiced by Kelly Macdonald) is a young and feisty Celtic princess with a jungle of wild red hair. She has two passions: using her favorite bow-and-arrow and riding her trusty horse through the rugged Scottish county side at full gallop. Her father King Fergus (Billy Connolly) is happy she has a weapon for protection against bears because one of them chomped his leg off. Elinor (Emma Thompson), the wise Queen, has tried to instill in her independent daughter an appreciation for the arts and feminine skills but it has not worked. Merida is a tomboy.

When her mother orders her daughter follow tradition and give in to an arranged marriage, Merida rebels against the idea. To solve the problem and change Elinor's mind, the princess has a witch cast a spell and then is shocked when the witch transforms her mother into a bear

Directors Mark Andrews and Brenda Chapman make the most of this mother-daughter relationship as they face various troubles and dangers in the wilderness trying to break the spell. We can add Merida to the growing list of female heroines in animated features (this one is in 3-D from Pixar). Her quest for freedom to choose her own husband is admirable. Also deserving of praise is the music by Scottish composer Patrick Doyle and ballads by Gaelic folk singer Julie Fowlis. The only criticism we have is of the needless violence in a battle between the bears which is too scary for young children. 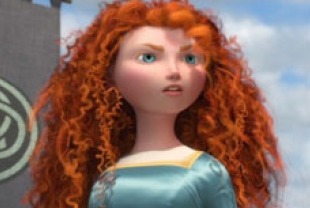 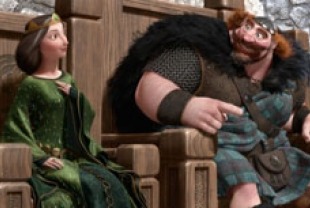 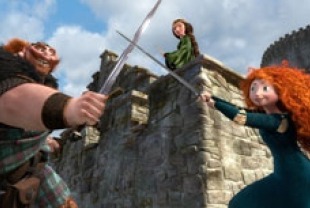 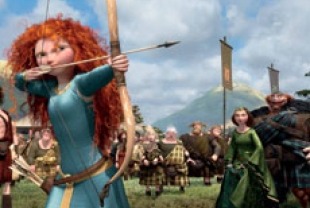