The Legend of Bagger Vance

Directed by Robert Redford
A mythological story about a depressed World War I veteran who finds his authentic self during a golf tournament, thanks to the help of the spiritual guide acting as his caddy.

After we have been smashed, bashed, torn, or twisted by a terrible tragedy or personal difficulty, finding our way back to hope and joy can be a daunting journey. Sometimes we lack the strength and willpower to pick ourselves up and return to the fray. That's when we turn to a spiritual guide who can help us find what we need to get back home.

In 1916, Rannulph Junuh (Matt Damon) is the best young golfer in Savannah, Georgia. As the town's golden boy, he's in love with Adele Invergordon (Charlize Theron), the prettiest and wealthiest girl in the community. Determined to seek glory on the battlefield in World War I, Junuh enlists. However, when all the men in his company are killed, he sinks into a permanent depression. The Medal of Honor winner returns home and spurns Adele.

In 1931, Savannah has been ravaged by the Depression, and the Krewe Island Golf Resort Adele's father has built has no visitors. Faced with bankruptcy, she comes up with the idea of a once-in-a-lifetime tournament between the best golfers of the day — Bobby Jones (Joel Gretsch) and Walter Hagen (Bruce McGill), who between them have won 24 national championships.

The town's boosters want someone to represent Savannah in the match. At a community meeting, ten-year-old Hardy Greaves (J. Michael Moncrief), who has idolized Junuh for years, suggests that his hero should play in the tournament. Only trouble is, the golden boy has lost his swing.

This heart-affecting drama is directed by Robert Redford. The screenplay by Jeremy Leven based on a novel by Steven Pressfield probes the mysterious grace that is available to all, especially those who have fallen hard. That theme is played out in the character of Bagger Vance (Will Smith) who appears out of nowhere "taking in some of God's glories," as he puts it. He volunteers to be Junuh's caddy provided that Hardy Greaves be part of the package.

Bagger Vance tells his new friend, "Inside each and every one of us is our one true authentic swing. Something we was born with. Something that's ours and ours alone. Something that can't be learned. . . . Something that's got to be remembered." The mythological journey that Junuh must take is a spiritual one that compels him to give up his depression, confront his demons, cope with his fear, and learn to trust his inner voice. The vehicle for his transformation is the game of golf where he becomes one with the game. This is only possible when he sets aside his ego and the need to win.

In the spiritual life, this process — when the false self is purged and the authentic self is retrieved — is recognized as being the critical step in personal renewal. The Legend of Baggar Vance demonstrates that this need not be an arduous journey nor one assumed without companionship and wise counsel. As Baggar reminds us: "God is happiest when he sees his children at play." 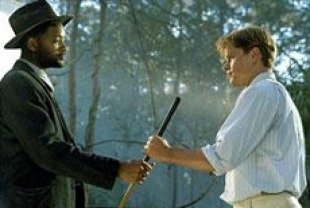