Directed by Hany ABu-Assad
A stirring drama set in Palestine where an intense young man experiences the torment of distrust in his private and public life.

Trust is the greatest affiliation. It is built on a deep respect for the other person and a feeling that he or she will stand by you no matter what. It is the basis of love relationships and friendships. When we trust someone, we can share our innermost secrets and reveal our tender spots without fear that these intimacies will be exposed or passed on to others.

Although trust is still a noble virtue in personal relationships, it is one that is under siege when set in the larger context of society. Politicians promise a lot and deliver very little; workmen make an appointment and then don't come; bosses make promises and don't follow through. Everywhere we look, we see the virus of distrust fomenting bad feelings between businesses and clients and employers and workers.

In an interview Hany Abu-Assad (Paradise Now), the director of Omar, says of the Palestinian people: "I can see why trust is such a big question . . . because they have been betrayed by everybody." This virulent distrust is at the heart of this intense drama set in the West Bank with its narrow streets and walls that divide people from their neighbors. Those fortunate enough to be strong and agile can climb over these obstacles to the other side but must watch out that they are not shot by Israeli patrol units.

Omar (Adam Bakri) is a baker who is in love with Nadja (Leem Lubany), the attractive sister of his long-time friend Tarek (Iyad Hourani). After he is humiliated and beaten up by some Israeli soldiers, this angry young man is ready to join his buddy and Amjad (Samer Bisharat) in an attack against those who have made their lives an unrelenting nightmare. They refer to themselves as "freedom fighters." Amjad shoots a soldier and after a dramatic chase through the streets, Omar is captured and put in prison.

There he is hung naked and tortured but he refuses to give up the names of his accomplices. When he mistakenly says to another prisoner "I'll never confess," it is seen as a valid confession under military law. Agent Rami (Waleed F. Zuaiter) offers him the only way out of a 90-year jail sentence without appeal: "You are screwed for the rest of your life, you have to work for us." Omar is given a month to find Tarek, who has disappeared, for them. He is thrilled to be released and to be united with Nadja. They talk about marriage and begin to plan their honeymoon.

The shocking turn of events near the end of Omar cannot be revealed in this review. Suffice it to say, this lovelorn Palestinian winds up shouldering a lot of guilt as well as feeling the pinch of being called a traitor among his own people. Working with the Israeli enemy has torn and twisted his soul and brought him to a very dark place.

In the same interview quoted earlier Hany Abu-Assad is asked why he makes films. He answers: "I think my artistic motivation is to be a witness to history. One hundred years from now, people will still look back on movies that are not just great stories, but also showed what happened in that period of time. To witness history, from my point of view. History is something we all write together." 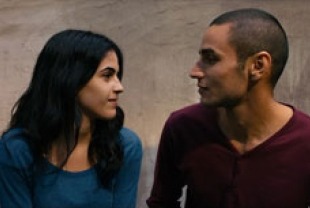 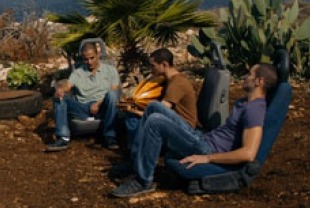 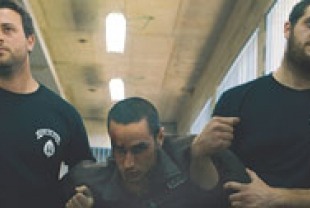 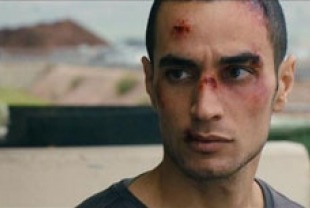 Interview with the writer and director