Directed by Ramon Zurcher
A vivid and wonder-inducing example of everyday spirituality during one day in the life of a family in a Berlin apartment.

"Reality can be discovered only by reading it," observes Lynda Sexson in Ordinarily Sacred. "Most of humanity has at some time or another deciphered the texts of animal footprints, the sound of water, the lines in the palms of their hands, the constellations, the arrangement of stones. Whatever we perceive religiously we 'read': that is, we interpret — we find meaning in relation to ourselves. The external is internalized."

In some primitive societies, no word existed for religion because all of life was viewed as sacred. In the West, the tradition of dividing the world into separate and unequal realms of the sacred and the profane has resulted in a disenchantment with the ordinary. It has led to a rigid and literalistic valuation of certain texts and a diminishment of the sacred potential of the spontaneous. And it has left millions of people starving for manna in the wilderness of contemporary culture. With practice, anyone can learn to recognize and affirm the sacred within the secular or the Divine within the ordinary.

We believe that most movies offer us the opportunity to harvest the multiple meanings of our lives as we come face-to-face with the typical occurrences of the day. And every once in while a special film startles our senses, stimulates our minds, and awes us with a magical and momentous appreciation of everyday spirituality. The Strange Little Cat is the debut feature film of Ramon Zurcher. It depicts one day in the life of a single family in a small middle-class Berlin apartment.

Almost all of the events take place in the kitchen, the one room where anything and everything can happen. The mother (Jenny Shily) floats around the space, sometimes giving orders, other times escaping to look out the window. Her smart and sensitive daughter Clara (Mia Kasalo) has the irritating habit of shrieking loudly whenever a kitchen appliance goes off.

In this confined place we hear the wail of a cat, the barking of a dog, the clanging of a washing machine, the shutting of a door, the grinding of the garbage disposal, and the whirl of a blender. Most amazing of all is the "magic bottle" on the stove which spins around speaking its own improvisational spiel.

The father (Matthias Dittmer) arrives in the kitchen and quizzes Clara on the spelling of milk and salad. Mother gives her some bits and pieces to feed the sparrows only to find out that Clara has stopped this act of charity. Karin (Anjorka Strechel), the older daughter, asks, "Is Clara crazy?" and Mother replies, "Yes." Then Karin notes: "The cat is crazy, too."

We first see the orange tabby clawing at a shut door and then meowing. She also appears in the cramped kitchen and manages to jump up on the table and knock a glass to the floor. The cat, we realize, is living in its own little world just like all the family members who surround her.

Mother may or may not be having an affair with her sister's husband who shows up to fix the washing machine. She tells Karin about an unsettling incident at the movie theater where a man put his foot over hers. She waited for him to remove it but he didn't. She tried to concentrate on the screen but found herself focused on his foot on top of hers. Finally, he removed it and she felt a great sense of liberation.

This conversation, really more a revealing confession, stands out from the others thanks to its revelations about Mother's sexual yearnings. Mostly, the interchanges between family members are on the level of Clara cutting her finger and Karin rubbing the blood on her nose and commenting, "Now, you're a clown!"

It is incredible to see the creative ways in which the writer/director orchestrates the choreography of the kitchen before the family meal takes place. Others arrive including Clara and Karin's brother, grandma, and a quiet teenager. The movements are balletic as various characters squeeze by each other putting away the dishes, getting a cup of tea, stepping aside to let another pass.

Although some may feel that The Strange Little Cat is essentially a detailed portrait of the obstacles to spirituality put up by the daily distractions of trivial chit-chat, time-consuming and boring chores, and constant noise; we see it another way. It is in the midst of these obstacles and complications that the sacred is carried into our hearts and minds by crazy cats, magical bottles on the stove, honest confessions, and cups of tea which bring great pleasure.

One of the greatest challenges of our time is to discover the sacred not in mountain-top experiences or expensive spiritual retreats but in the rhythms and pauses of ordinary days. To dance with the Divine in the kitchen we need more films like The Strange Little Cat to inspire us! 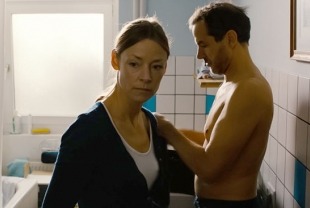 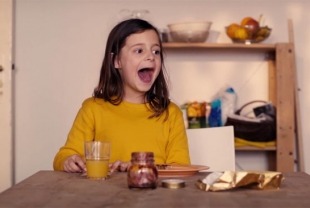 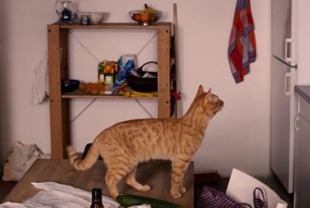