Directed by Craig Gillespie
A superb sports drama about the spiritual transformation of a sports agent.

JB Bernstein (Jon Hamm) is a driven sports agent who in his glory days represented Barry Bonds and Emmett Smith. Since he and his Indian-American business partner Aash (Aasif Mandvi) set up their own agency, things have not been going well. He is in hot pursuit of a football star but a powerful and rich group is also courting him.

In quiet desperation, JB comes up with an out-of-the box plan to resurrect his career. He convinces a Chinese multi-millionaire to finance a trip to India in search of fast-ball pitchers. The gimmick is to hold a contest and draw out new talent in the land where cricket is king. If they can find baseball players there, they will also get up to a billion new fans. After holding pitching contests in Mumbai, Lucknow, and Agra, he and his partner bring back to Los Angeles two gifted 18-year old athletes — Rinku Singh (Suraj Sharma) and Dinesh Patel (Madhur Mittal).

Here is a sports movie with spiritual messages. JB's wayward narcissism and his grubby pursuit of money, power, and fame are convincingly criticized by Brenda (Lake Bell), an outspoken young woman who is renting a bungalow from him. She does more to make the two Indians feel at home than JB does. In fact, she is his spiritual teacher opening him up to an entirely different set of values and way of living. Two others also help turn him around with their integrity and ethical authenticity — retired baseball scout Ray (Alan Arkin) and a USC pitching coach Tom (Bill Paxton).

The spiritual clout of Million Dollar Arm no doubt is due to the film being directed by Craig Gillespie who was at the helm of Lars and the Real Girl, a favorite of ours and one of the most spiritually literate films of 2007. The screenplay is by Tom McCarthy who wrote The Station Agent and Win Win, two more spiritually literate films. Evident again are these filmmakers' familiar themes of the importance of community life, the blessings of friendship, and the lessons that can be learned from struggle. The high caliber cast manages to infuse even the melodramatic moments of this saga with memorable impact. You can't help cheering for these players and the team around them. Based on a true story, Million Dollar Arm touches our heads and our hearts. 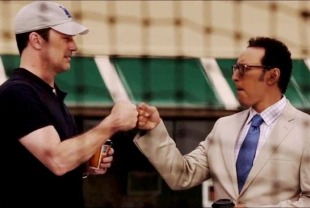 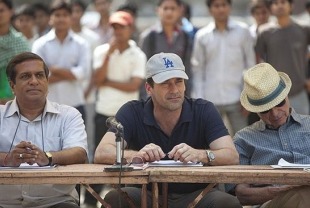 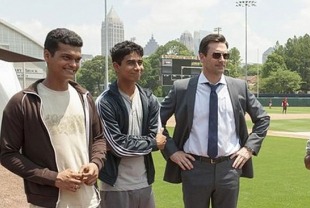 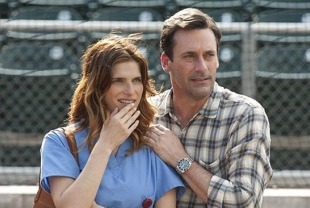