Directed by Christopher Nolan
A puzzle thriller about a man with amnesia, turns out to be an intriguing probe of identity, loss, mental instability, mystery, and trust.

Leonard Shelby (Guy Pearce) is a Los Angeles insurance fraud investigator who drives a Jaguar but lives in a tawdry roadside motel. The desk clerk realizes that there's something odd about this fellow who can't seem to remember much. Back in his room, Shelby discovers that his entire body is covered with tattoos bearing messages about the rape and murder of his wife. He also has in his possession Polaroid photographs of two strangers with captions underneath them: The man's says, "Don't believe his lies," and the woman's says, "She will help you out of pity."

Memento is a "puzzle thriller" in the vein of Usual Suspects. Christopher Nolan has written and directed this Hitchcockian tale based on a short story by his brother Jonathan. It turns out that Shelby took a blow on the head the night his wife was murdered, and he suffers from permanent short-term memory loss. In order to avenge his wife, Shelby is trying to find the killer. To do so means taking Polaroids, scribbling notes, and even writing critical information on his body.

As in Harold Pinter's Betrayal, more and more crucial information is revealed as the story moves backward in time, scene by scene, to the beginning. The result is an intriguing probe of identity, loss, mental instability, mystery, and trust. Is the beautiful bartender (Carrie-Anne Moss) he meets an ally or an enemy? Is his so-called best friend (Joe Pantoliano) a cop or a con-man? And is there any way out of this prison of memory loss? Memento is the kind of film that you'll want to see again in order to fit together all the pieces. While you watch it ponder the following thought by Aldous Huxley: "Every person's memory is his private literature." 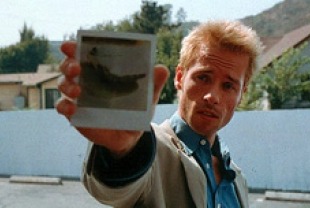