Directed by Alejandro Gonzalez Inarritu
A searing Mexican film that depicts the toxicity of human betrayal.

Welcome to Mexico City where 21 million people mingle with a million homeless dogs. It is a place of pollution, heat, violence, and heartbreak. On any given day, spouses will cheat on each other, brothers will betray brothers, and the ante of suffering goes up a few notches.

This searing Mexican film, an Academy Award nominee for Best Foreign Film of 2000, depicts the toxicity of that kind of human betrayal. It begins with a frantic car chase as Octavio (Gael García Bernal) and his friend flee two armed thugs from an illegal dog-fighting match. He crashes into another car, and we are taken into the lives of the people affected by the crash.

Octavio is in love with his brother's wife, Susana (Vanessa Bauche), and wants to go away with her. He comes up with a moneymaking scheme to pay for their escape: entering his dog Cofi in the dog-fighting pits of Mexico City. Although Susana has sex with Octavio, she doesn't really want to leave her husband (Marco Peréz), a thief. Here Octavio's betrayal is met with betrayal.

Valeria (Boya Toledo) is in the car he crashes into, and her leg is badly damaged in the accident. She's a model who has just been given a new apartment by Daniel (Álvaro Guerrero), a publisher. He's left his wife and two daughters to start a new life with her. But the real love of Valeria's life is Teddie, her Lhasa Apso, who playfully jumps down to explore a hole in the floor and disappears for a few days, leaving her completely distraught. Daniel, who has betrayed his wife, soon finds himself playing second fiddle to a dog.

The last section of the film revolves around El Chivo (Emilio Echevarría), a one-time revolutionary who now lives in a hovel with a pack of dogs he's rescued from the street. He occasionally works as a hit man but pines for the daughter he left behind when she was two years old. He takes one last job so he can leave her some money. It involves a wealthy brother who wants his half-brother assassinated. El Chivo saves Octavio's dog from the car crash and adopts him, much to his dismay, given the animal's bloodthirsty behavior.

Commenting on Amores Perros, director Alejandro González Iñárritu makes reference to the Biblical themes in the three-part drama. The same seeds that spawned the violations perpetrated by Cain, Joseph's brothers, and Judas are evident in the lives of these Mexicans.

The other thematic strand is the role of dogs in all the stories. I recalled a quotation from Milan Kundera's novel The Unbearable Lightness of Being: "True human goodness, in all its purity and freedom, can come to the fore only when its recipient has no power. Humankind's true moral test, its fundamental test (which lies deeply buried from view), consists of its attitude toward those who are at its mercy: animals." In Amores Perros, all of the characters except El Chivo fail this moral test and pay the consequences. 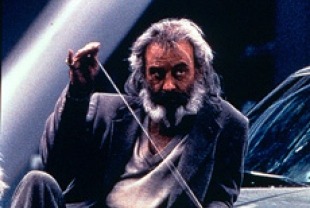