Directed by Ann Hu
A delightful tribute to the marvels and the magic of cinema, set in Peking when silent movies first arrived.

In 1902, Liu Jinglun (Xia Yu) works as a photographer for Master Ren (Liu Peiqi) in Peking. He is very much taken with Western inventions like the old Victrola he finds one day. Imagine his surprise when Raymond Wallace (Jared Harris), an Englishman, arrives in the city with "shadow magic" — his term for the first silent movies. Once Liu sees these images on a screen, he is completely captivated by the new medium.

Inspired by a true story, first-time director Ann Hu has created a delightful tribute to the marvels and the magic of cinema. She uses Liu's love of the movies and his friendship with a Westerner to explore both the xenophobia of the Chinese and the genuine clash between ancient tradition and the changes brought on by modernity.

These themes are also explored in a subplot revolving around Liu's impending arranged marriage to a middle-aged widow and his secret love for Ling (Xing Yufei), the beautiful daughter of Lord Tan (Li Yusheng), China's most popular opera singer. Liu arouses the ire of his employer by secretly working with Raymond Wallace. He also comes across as a traitor to many of his peers for his involvement in what they call "foreign mischief." These tensions reach a boiling point when Wallace and Liu are invited to give a demonstration of shadow magic to the Empress Dowager at the Palace of the Forbidden City.

Similar to the Italian film Cinema Paradiso, this one celebrates the many pleasant moods evoked by moving images on a screen. The Chinese people plunge to the floor when they see a train and laugh at the sight of acrobats forming a pyramid. Watching his family and friends respond to the films so deeply leads Liu to create his own movie with Wallace about everyday people, life in the city, and the staggering vistas of the Great Wall. 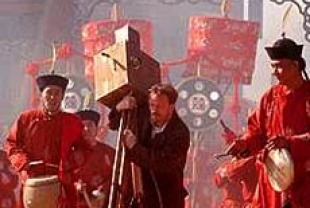