Directed by Alejandro Gonzalez Inarrito
Some fresh takes on midlife crises, celebrities in America, and the wild popularity of the social media.

Twenty years ago, Riggan (Michael Keaton) was catapulted into stardom with his role in Birdman, a superhero movie. It bothers him that people still want his autograph and seem to have no knowledge or interest in all the roles he has played since then. In order to resurrect his sputtering career and give some meaning to it in his own eyes, this middle-aged actor has written and is directing a stage adaptation of Raymond Carver's "What We Talk About When We Talk About Love."

The play is in its final rehearsals when one of leads is injured. Mike Shiner (Edward Norton), a Method actor with a large ego, joins the cast. Besides clashing with the director on the approach to various scenes, he flirts with Sam (Emma Stone), Riggan's daughter, who is just out of rehab. She's working as an assistant on the production and is an outspoken critic of her father's folly in not making use of social media to promote himself and the project.

As the previews begin, Riggan gets more and more anxious and finds himself listening to the advice of the disembodied Voice of Birdman who keeps telling him to get real and make another Hollywood superhero flick. He tells him, "Those people don't know what you are capable of," a fact Riggan seems to prove as he uses telekinetic powers to move objects around his dressing room. (In the opening scene, he is sitting in meditation three feet off the ground.)

Previews are marked by several outlandish episodes: Shiner is drunk for one performance, and Riggan arrives dressed in only his shorts for the final scene of another. An encounter in the bar with the all-powerful theater critic (Lindsay Duncan) for The New York Times leaves him in a raging depression. She labels him as a celebrity and not an actor and vows to kill the play when she reviews it.

Director Alejandro Gonzalez Inarritu is a serious filmmaker whose works include Amores Perros, a searing Mexican film about the toxicity of betrayal; 21 Grams, the story of a diverse group of people on a journey of guilt, pain, sacrifice, and redemption; Babel, a about what happens when love is ignored, squandered, or annihilated by anger, alienation, hatred and violence; and Biutiful, about the dehumanized treatment of illegal immigrants. Birdman has equally serious themes, including the nature of identity in a world where people are always playing roles.

Inarritu also has come up with some fresh takes on the well-traveled roads of midlife crises, the role of celebrities in American culture, and the wild popularity of the social media in this digital age. With his life swirling out of control all around him, Riggan reaches out to his ex-wife Sylvia (Amy Ryan) for love, apologizes to his pregnant co-star Laura (Andrea Riseborough), expresses his appreciation to his other female co-star and friend Lesley (Naomi Watts), and tries to listen to the wise counsel of his hard-working lawyer/best friend Jake (Zach Galifianakis). But not even these acts of kindness can take away the fear that has put its hands around his neck.

Certainly the most creative flourish in Birdman is the jazzy drum solo which serves as the emotional core of the movie, matching the many moods of Riggan's quest for meaning. This never-ending quest is mirrored in the cinematography; the whole film is one long shot with the camera following one actor after other. Most of the action takes place backstage at the St. James Theatre in New York City just off Times Square. For many of those in the entertainment business, Broadway is a sacred place where there are many joyous beginnings and many tragic endings. 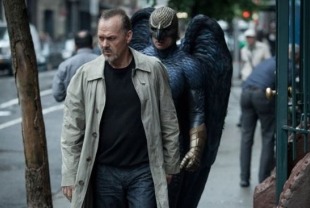 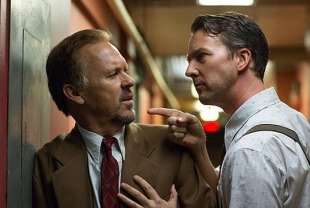 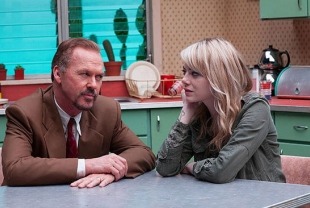 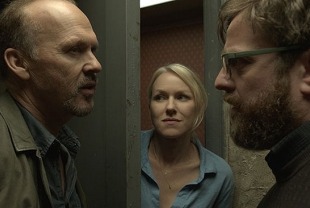