Directed by Margaret Brown
A hard-hitting documentary about one of the largest man-made environmental disaster in history.

The United States is the largest consumer of oil in the world, using 22 percent of the world's supply. Whereas other countries have sturdy and responsible energy policies for the future, America has none. Many experts were convinced that the 2010 Deepwater Horizon oil rig explosion that killed 11 people and spilled more than 4.2 million barrels of oil into the Gulf of Mexico would result in drastic changes. But no new safety legislation for offshore drilling has been passed, and many victims of this terrible man-made environmental disaster are still waiting for compensation from BP. While citizens look around and think that everything has returned to normal, the large amounts of BP's crude oil that sank to the ocean's floor poses hazards to the entire ecosystem. (See "Scientists Discover Huge Bathtub Ring of Oil on Ocean Floor from BP Oil Spill")

The Great Invisible is a hard-hitting and illuminating documentary on the oil spill directed by Margaret Brown. The film makes clear the gross negligence in BP's actions leading up to the catastrophe and the bungled cleanup operation afterward. Instead of spending time with talking heads, the emphasis here is on the perspectives of survivors of the blast, family members of victims, and the fishermen who are out of work and worried about their futures.

In Morgan City, Louisiana, the birthplace of the offshore oil industry, tugboat captain Latham Smith can't believe the cavalier and short-sighted attitude still held by many citizens: "People want a car they can drive anywhere they want to. They want a light bulb they can turn on any time they want to. They want air conditioning they can turn on when it's hot, not just when the wind blows."

Perhaps the most sympathetic person interviewed is food bank volunteer Roosevelt Harris who makes the rounds distributing canned goods to poor people who have lost their homes or who are barely surviving. He serves as a cheerleader trying to get these residents of "Hard Luck City" to file claims for the money they desperately need. Hope is one of the great invisibles in spirituality, and this kind-hearted man personifies its healing powers in the face of so much loss, depression, and fear. 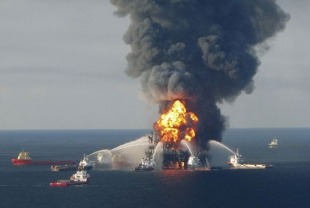 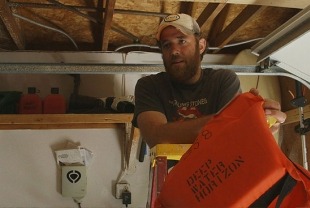 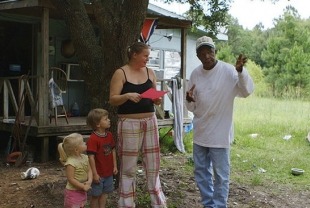