Buffalo Bill and the Indians

Directed by Robert Altman
Explores the interface between heroes, hypocrisy, and illusions in the Wild West.

"It was wonderful to find America, but it would have been more wonderful to miss it," Mark Twain wrote in Pudd'nhead Wilson's Calendar.That's a sentiment Robert Altman would appreciate.

This director is deserving of praise even when he falters because he takes more risks than most contemporary American filmmakers. Although this movie is loosely based on Arthur Kopit's 1968 play Indians, it is really a thematic sequel to Altman's film Nashville. It, too, explores the interface between heroes, hypocrisy, and illusion. What kind of America has been passed on to us by historians? How much of it is fact and how much, fantasy?

The time is 1885. Colonel William F. Cody (Paul Newman) is the chief attraction in an open-air-and-tent show called "Buffalo Bill's Wild West: An Absolute Original & Heroic Enterprise of Inimitable Lustre." The action of the film takes place in and around this vaudeville environment where tourists come to see various acts (buffalo wrestling, sharp-shooting) and entertainments (stage coach robberies, cowboys fighting Indians). Buffalo Bill and his entourage (Joel Grey as producer, Kevin McCarthy as public relations man, Harvey Keitel as handyman) have packaged the history of the Wild West in circus stunts and carnival spectacles. When Grey announces at one point, "I'm going to Cody-fy the world," we recognize the preposterousness of their ambitions. And when Annie Oakley (Geraldine Chaplin) asks Buffalo Bill why he doesn't tell the truth in his show, the superstar replies, "I got a better sense of history than that."

There is a great deal of excitement in camp when Chief Sitting Bull (Frank Kaquitts) is brought to the Wild West Show by the Army. He is accompanied by a strong, willful interpreter (Will Sampson). The idea is to put the Chief in a vignette about the Battle of Little Big Horn. The Indians have an alternate story they want to tell — a dramatization of American soldiers slaughtering unarmed Indian women and children. Needless to say, their piece is rejected. Instead the white audiences are given Buffalo Bill's revision of history: in the Battle of Little Big Horn, Custer wins! "Truth is whatever gets the most applause."

Cinematically, Altman is in top form giving us a fluid visual sense of the show biz milieu — deals in progress, venality, confusion, the eternal hustle. Through the use of long pulled back shots and overlapping dialogue we gain a varied perspective on the busy and bothersome life in the Wild West Show. Two of the funniest sequences involve Annie Oakley accidentally giving her husband a flesh wound as he holds her targets and a visit to the camp by President Grover Cleveland (Pat McCormick) and his pseudo-sophisticated wife (Shelley Duvall).

Altman is out to debunk the legend of Buffalo Bill (almost all of the director's films have a satirical edge). History presents this man as a hero, a great scout and hunter. Here we see a vain and shallow deceiver who exploits everyone around him, can't make it with his opera-singing women, and is almost always drunk. His flowing locks are really a toupee, and he can't even ride very well! He is, as Ned Buntline (Burt Lancaster) points out, a manufactured hero. Paul Newman with his celebrity image is just right in the role.

The problem in this movie is that Altman is saying less than he means by saying too many things at once. The depiction of the Indians is too idealized and the slam on Cody, too overdrawn. In the film's climactic scene, the writer-director cannot resist hammering the point home just one more time: "A hundred years from now, I'll still be Buffalo Bill — Star," says the deceiver to Chief Sitting Bull in a dream, "and you'll just be the Indian. I give 'em what they expect."

Altman is also a showman, however, and he can't quite bring himself to completely blackball Buffalo Bill. There are nuances in this portrait that suggest the director doesn't hold Cody fully responsible for his style. In a recent interview Altman compared Buffalo Bill to Willy Loman in Miller's Death of a Salesman — a victim trapped in somebody else's dream for him. Perhaps we get the heroes we deserve. And perhaps we would rather find an illusory America than discover the real one.

Special features on the DVD include an original featurette "From the Prairie to the Palace"; the original theatrical trailer; and a teaser trailer. 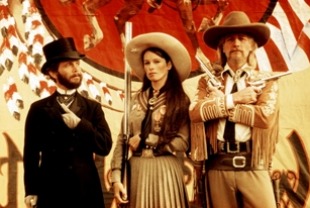