Directed by Adam Miklos
Visits to two Tibetan Buddhist nunneries where girls and women blend tradition with large dollops of the media and the secular world.

There is a long and lamentable tradition in Buddhist cultures that perceived women as lesser beings. Families would sell daughters in order to be able to send their sons to monasteries. Commonly used Tibetan words for women literally mean "inferior being" or "lesser birth." Some traditional Buddhist masters persist in the view that women are not capable of attaining realization at all; they are backed up by liturgies where women pray for a better birth in a male body.

The current Dalai Lama, in contrast, has been very supportive of Buddhist nuns, and the spiritual teachings of Pema Chodron, Thubten Chodron, Jesunma Tenzin Palmo, and other Buddhist teachers have struck a chord with women and men around the world.

In Daughters of Dolma, Hungarian-born writer-director Adam Miklos take us to the Kathmandu Valley in Nepal for visits to two nunneries. Ani Jangchup and Ani Pema share insights into their lives. In our minds, we usually think of Buddhist monastic life as consisting of study, hard physical labor, and devotional practices. But these two startle us with their interest in the modern world.

Ani Jangchup supports Manchester United, her brother's favorite soccer team. When this nun gets in a discussion about the gender differences between women and men, she makes some good points about the special treatment monks receive from their families. Ani Jangchup's seriousness comes across when she speaks of her pursuit of the Lopon, a nine-year degree equal to an M.A.

Ani Pema is a very vibrant nun who loves horror movies, listening to Michael Jackson, and using Facebook. She has not only read Eat, Pray, Love, she's seen the movie. At another nunnery for younger girls, we see them all seated on the floor in front of a TV set; others kick around a soccer ball in an enclosed area.

It will be interesting to see how observing ancient Tibetan Buddhist traditions while also paying attention to the media and entertainments of secular society will change the lives of these nuns. Will large numbers of them drop out or will they be encouraged by exposure to global culture to transform the path of Tibetan Buddhism?

Here is a blessing for these nuns:

"May you live long and realize your fullest potential.
May your spirit soar high, and may you always have the courage to follow the truth.
May all your aspirations be fulfilled and goodness prevail.
May every being on earth find peace and happiness, shelter and refuge.
Don't let anybody tell you it can't be done."
— Michaela Haas in Dakini Power

Special features on the DVD include the trailer and a stills gallery. 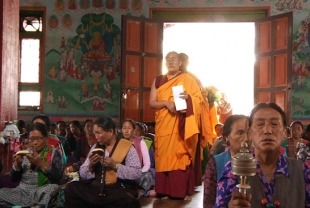 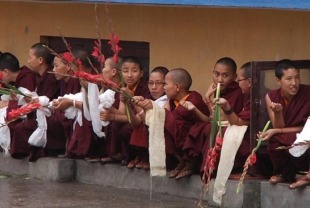 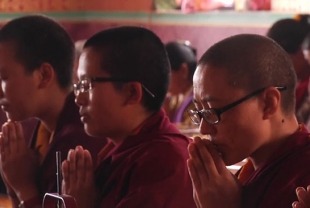