Directed by Edward Zwick
A call to speak out against the neglect of those with untreated mental illness.

Bobby Fischer, an American world chess grandmaster, died of kidney failure at the age of 64 in 2008. After years as a recluse and a vagabond, he was living in Reykjavik, Iceland, where in 1972 he had beaten Boris Spassky, the Russian grandmaster. In this politically charged moment, he was the first North American to become the reigning world chess champion.

Edward Zwick directs this biodrama written by Steven Knight. He takes us on a journey through the life and times of this child chess prodigy who yearns to be the best player in the world. From his base in Brooklyn, this youngster has a string of triumphs over formidable opponents. Like other masters of the game, by the time he is a young man (Tobey Maguire) he has a huge ego. Obsessed with winning, he explodes whenever he loses and puts in more hours a day (10-12 hours) in practice than do the other chess champions. 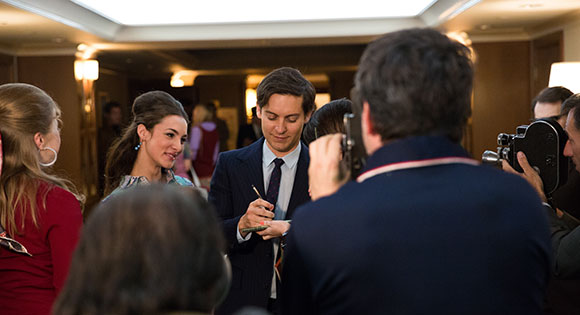 Fischer has a hard time relating to his activist mother (Robin Weigert) who is a passionate Communist; he finds a surrogate mother in his half-sister Joan (Lily Rabe) who supports his enthusiasm and commitment to chess. Whenever, this traveling chess master plunges into despair, he turns to her for love and connection. 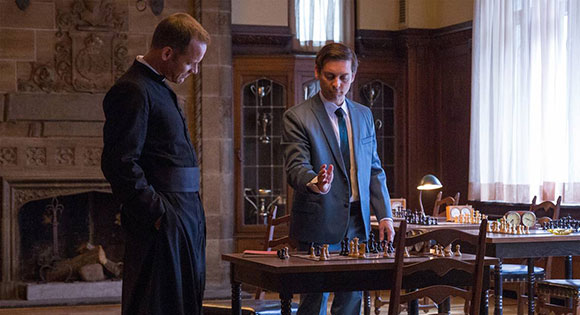 On the road, Fischer is accompanied by his "second," Father Bill Lombardy (Peter Sarsgaard), and his manager/attorney, Paul Marshall (Michael Stuhlbarg). Whereas the former shows real concern for Fischer's health and well being, the latter wants to maximize his status as a symbol of U.S. superiority over Russia. The patience of both men is sorely tested when Fischer enters global chess competitions culminating with games against Russian grandmaster Boris Spassky (Liev Schreiber).

Pawn Sacrifice does not shy away from a graphic depiction of Fischer's mental illness which had such a devastating impact on his life. He was not diagnosed or treated but his behavior clearly indicated that he suffered from paranoia and other disorders. This contributed to his awkward, provocative, and hostile behavior toward his chess opponents, tournament officials, and his companions. He would not tolerate any noise or distraction in tournament halls and once insisted that a match be held in a back room at a sports facility. He was convinced that the Russians were bugging his hotel rooms and trying to poison him. He listened to tapes filled with anti-Semitic diatribes and then repeated these hate-filled statements in public. 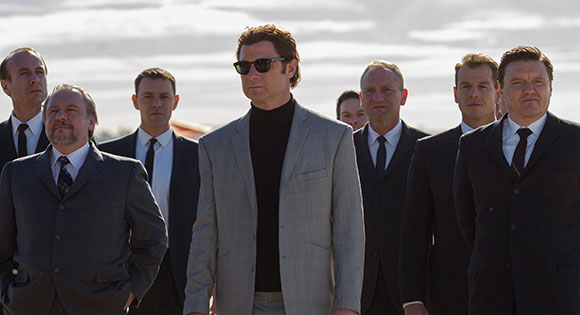 There has been what New York Times columnist Nicholas Kirstof calls a "code of silence" around mental illness. For public figures, such as Bobby Fischer, this has meant that they are not given the care they need to function in society. Instead, odd behavior is associated with being part of the game or the risks of a genius personality. Director Edward Zwick has done us all a service by refusing to ignore the mental illness in Fischer's story. The poignant, tense, and raw performance by Tobey Maguire as the trouble chess grandmaster draws out our empathy and challenges us to speak out against the neglect of those whose lives are shattered by untreated mental illness.

"People go to the movies to see a world unfamiliar to them. I want the audience to lose themselves in an experience not their own. In this case, we see people we know a little bit about and are surprised by what we discover. The challenge of this movie was to portray chess in a way people will understand. We tried to make it exciting and suspenseful, even for people without a deep understanding of the game, because it brings the audience into the mind of Bobby Fischer. I think it a really funny, emotional and truly entertaining film. That's credit to the actors and to the script."
— from an interview in the press notes for Pawn Sacrifice