Directed by Roland Joffe
A drama about the restorative justice and forgiveness work of Archbishop Desmond Tutu and South Africa's Truth and Reconciliation Commission.

Many men and women feel wounded by what others have done to them or their loved ones. They also suffer because they cannot forgive those who have hurt them.

In post-apartheid South Africa, this reality was compounded by the fact that many blacks did not know what crimes were committed by the white government's hit squads. Family members craved closure and release from the prison of the past. In many cases, the white perpetrators desperately sought to unburden themselves of the guilt and shame they felt about what they had done.

In response in 1994, the government of Nelson Mandela established the Truth and Reconciliation Commission (TRC), chaired by Anglican Archbishop Desmond Tutu. They recognized that to heal the nation during its transition from despotism to democracy, it was necessary to look the beast of apartheid in the eye so it would never rear up its monstrous head and fury again. They agreed that the pursuit of punishment would simply pass on the violence. Instead, the TRC would operate under the umbrella of restorative rather than retributive justice: victims of human right violations would be given a chance to tell their stories and to rehabilitate their dignity. TRC would grant amnesty to those who publicly confessed their crimes, often with the families of their victims present, and asked for forgiveness. It was a daring effort in a deeply scarred country.

"Having looked the beast of the past in the eye, having asked and received forgiveness and having made amends, let us shut the door on the past -- not in order to forget it but in order not to allow it to imprison us. Let us move into the glorious future of a new kind of society where people count, not because of biological irrelevancies or other extraneous attributes, but because they are persons of infinite worth created in the image of God."
— Desmond Tutu in Learning to Pray

The Forgiven is a screen adaptation of Scottish playwright Michael Ashton's play The Archbishop and The Antichrist. This tense drama is directed and co-written by Roland Joffé whose serious and ethically sobering films include The Killing Fields and The Mission. Shot completely in Cape Town, South Africa, the film had the blessings of Archbishop Tuto who said it was "not only a film about a certain time and place, it is a paean of hope to humanity at large." 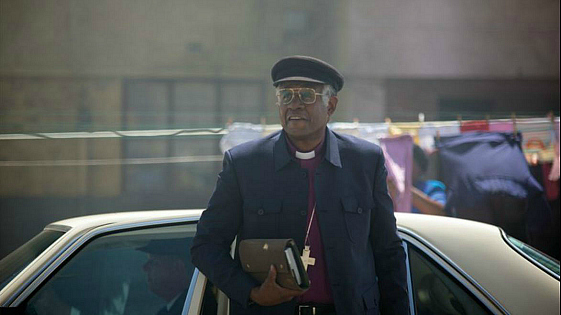 Archbishop Desmond Tutu (Forest Whitaker) has been called out of retirement to head the Truth and Reconciliation Commission. In addition to holding hearings, he is supervising the collection of remains at grave sites. And he is meeting privately with families of victims, reassuring them that he will do all he can to find out what happened to their loved ones. He is moved by the grief of Mrs. Morobe (Thandi Makhubele) over her daughter who went out one night and never came back.

"Suffering can be transformed and redeemed. There is no such thing as a totally hopeless case. Our God is an expert at dealing with chaos, brokenness, with all the worst that we can imagine. God created order out of disorder, cosmos out of chaos, and God can do so always, can do so now -- in our personal lives and in our lives as nations, globally. The most unlikely person, the most improbable situation — these are all "transfigurable" — they can be turned into their glorious opposites. Indeed, God is transforming the word now — through us — because God loves us.
— Desmond Tutu in God Has a Dream

After receiving a letter pleading for clemency from Piet Blomfeld (Eric Bana), Tutu is told by a colleague that he's a psychopath and convicted killer. The Archbishop responds: "I know who he is. No one is beyond redemption." Blomfeld is a raging racist whose served as a loyal member of a government hit squad. His constant use of the "kaffir" racial slur is a sign of his hatred of blacks. Now in the hellish Pollsmoor Prison, he talks with Tutu and begins some plans that will surprise everyone. 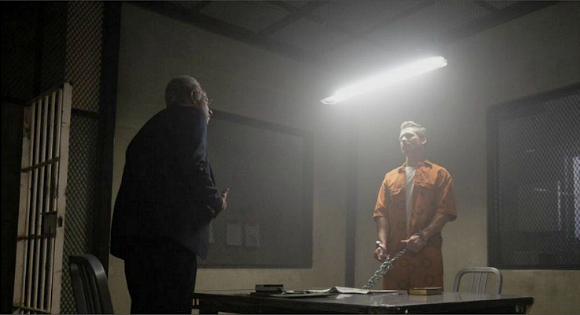 The visits have a deep effect upon Tutu. Blomfeld taunts him about his beliefs in freedom and equality and God's love for all. After he loses his temper, the prisoner asserts that the archbishop has hatred in himself. But Tutu rejects Blomfeld's vision of humanity, explaining that whereas he can't change where he has been, he can change where he goes. Forgiveness is always an option.

"I would not know how to be a human being at all, except I learned this from other human beings. We are made for a delicate network of relationships, of interdependence."
— Desmond Tutu in Wisdom of the African World

After learning more about Blomfeld's childhood trauma, Tutu recognizes there is more than just politics involved in his case. Nevertheless, he will accept no excuses. "I have to stare in the mirror at myself every day," he tells Blomfeld, "but so do you. We are both just men." Quoting Milton's Paradise Lost, a poem known by the prisoner, he reminds him: "The mind can make a heaven of hell or a hell of heaven." In a powerful scene, he urges Blomfeld to "come out of hell." 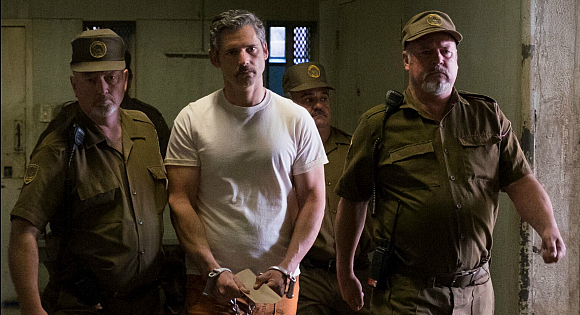 Although we wish director Joffé had used subtitles for some of the South African dialogue that is hard to understand, he does manage to make the most of several compelling scenes. The purpose and gifts of the Truth and Reconciliation Commission are vividly conveyed in the courtroom when Mrs. Morobe finally meets a man present at her daughter's murder and forgives him.

Although the events recreated in this film took place more than 20 years ago (Blomfeld is a composite character), the lessons learned in South Africa have relevance today all over the world. When Mrs. Morobe decides that she does not want her daughter's legacy to be one of revenge and will begin again with a clean slate, we vowed to support other efforts of restorative justice. And when we see conflicts and tensions around us, especially among the races, we want to remember one statement from Archbishop Tutu: "Tears don't have any color."

R - disturbing/violent content, language throughout including some sexual references