Directed by Gustaf Möller
A tense chamber thriller that packs a gut-wrenching punch, even without special effects!

Every on-screen moment of Gustav Möller’s chilling The Guilty (Den Skyldige) occurs inside one Denmark emergency dispatch office, but through telephone dialogues that build upon one another with increasingly horrifying detail, an entire world of slippery guilt and justice emerges over the course of 85 nail-biting minutes. 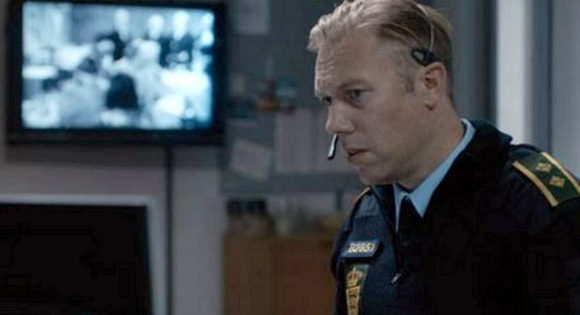 Police officer Asger Holm (an electrifying Jacob Cedergen) has been demoted to an isolated Emergency Services desk position while he awaits a court date following his role in a controversial shooting. The details of his approaching trial and his current benched predicament trickle in through cell phone calls with his partner (voiced by Omar Shargawi), a loyal friend who has apparently bent the truth in his own testimony in order to protect Asger. The specifics are murky, but one thing is clear: Asger is feeling sharp pressure and wants nothing more than to get out of his present purgatory, both the existential dread inside his head and the physical reality of the claustrophobic office to which he’s been relegated.

A few conversations with emergency callers at the film’s start also show Asger’s main character flaw: he is impatient and impulsive, eager to presumptively pinpoint the needs of clients and dismiss those he judges unworthy of his attention, particularly when he deems an injury or request too minor or in need of some scolding before offering aid. He’s a bit of a jerk to his current officemates as well, clearly feeling himself above the everyday boredom of this far-from-thrilling office. But the typical doldrums of Asger’s current situation are interrupted and thrown for an unexpected loop by a call from a desperate-sounding voice, simply identified by Asger’s computer system as "Iben" (voiced by Jessica Dinnage). 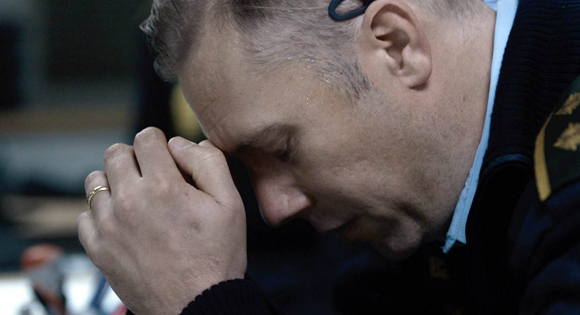 From the moment Asger first hears Iben’s voice, his skewed, isolated interpretation of what’s going on takes over, spinning him into a desperate attempt to save her from danger he can only hear and construe through his headset. The audience is also pulled into Asger’s snap judgments, as we are only allowed to see Asger’s sweaty expressions and hear the disjointed and patchy calls he’s hearing, with Iben, with her husband (voiced by Johan Olsen), and with her daughter (voiced by Katinka Evers-Jahnsen). His interpretation becomes our own, his belief about what’s actually going on and what he’s doing to save Iben become our own, until an unpredictable twist late in the game pulls the rug out from under both Asger and the audience, thrusting us into a spiritual excavation of how helping is only helpful when it is thoughtful, careful, and free of hubristic heroism.

Fleshing out a review of this punchy parable with too much detail would rob the viewer of the twisty rewards Möller has laced throughout, and those rewards make this uniquely jittery ride into self-doubt and self-discovery well worth taking. In the end, although Asger’s particular situation is specific and heightened, attentive viewers will draw clear connections between his revelations and the cloudy decisions of their own lives. In an age where snap judgment rules the day, Möller’s dissection of a classic genre provides the thrills necessary to help the story soar while also supplying ample philosophical food for thought that transcends the genre’s more typically immediate payoffs.