The King of Staten Island

Directed by Judd Apatow
A dramedy about the surprising transformation of an irritating person.

"My Grandmother had a very pungent phrase for difficult people: 'A lash in the eye.' We all know from experience how an eyelash in the eye can be so irritating that we just cannot think about anything else. That is exactly how difficult people affect those around them. But for the mystics, this lash in the eye is an opportunity for learning the skills in life that matter most: patience, forgiveness, and freedom from likes and dislikes."
-- Eknath Easwaran in The Bhagavad Gita for Daily Living, Volume 2

As a director Judd Apatow not only has won millions of fans with his funny and off-the-wall dramedies (Trainwreck, The 40-Year-Old Virgin, Knocked Up), he has also managed to spice up these stories with his idiosyncratic brand of humanism. He co-wrote the hilarious script of The King of Staten Island with Dave Sirus and its star Pete Davidson. Just when you think you have figured out their storyline choices, you will be bowled over with what takes place next. Every one of their characters refuses to stay predictable; they always seem ready to set out in new directions. 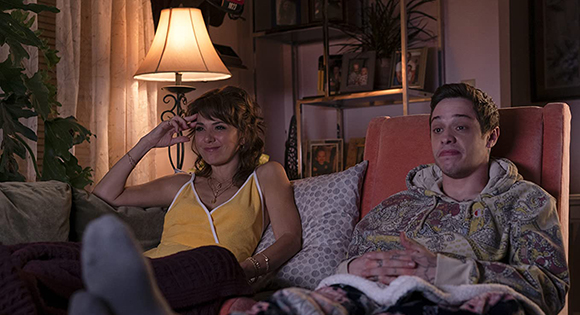 Scott (Pete Davidson) is a 24-year old "wanker" who lives at home with his widowed mother Margie (Marisa Tomei), an emergency room nurse, and his talented sister Claire (Maude Apatow). At a party in honor of Claire's imminent departure for college, Scott, as usual, feels like an outsider and a loser; he tells people he has a mental illness that he is treating. His big dream is to be a tattoo artist and open a combination restaurant and tattoo parlor. Meanwhile, he practices doing tattoos on his friends when they aren't all just sitting around, smoking dope, and thinking about a life of petty crime. 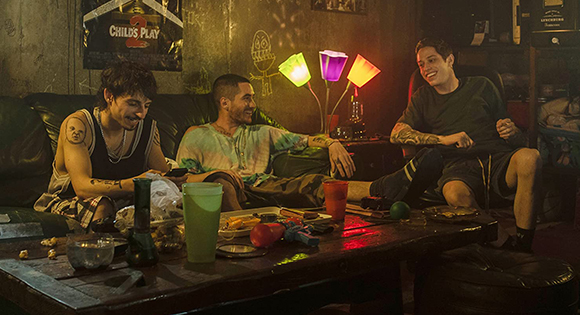 The screenwriters zero in on Scott's collapsing world after Kelsey (Bel Powley) breaks up with him; she's a friend since childhood who wants to go public with their relationship instead of hiding their wobbly world of sex and small talk. Then, even more upsetting, his mother, tired of being alone, falls in love with Ray (Bill Burr), a fireman. Scott's father was also a fireman, who died during a fire rescue. He's never gotten over losing his father when he was just seven, and the last thing he wants in his life is another fireman. But as Margie and Ray get more serious, they decide it would be best for Scott to find a place of his own. With no job or money, this is a big challenge for the young man. 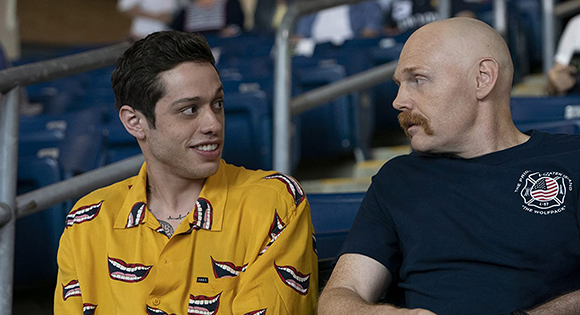 During an argument, Claire tells her brother: "You are so crazy that you make everyone around you feel crazy." There is no doubt about it. Scott is a selfish, immature, and irresponsible slacker who irritates not only those in his family circle but also those he doesn't know at all. But he possesses some redemptive character qualities which serve him and others well in the satisfying finale of The King of Staten Island.

Like the unheralded island where he has been raised, this difficult person shines when he discovers his own special place in the world -- nothing grand or spectacular but just right for him. And proving that every life is full of surprises, you'll never guess who is the one who makes this possible.

R -- language and drug use throughout, sexual content, some violence/bloody images