Directed by Chaitanya Tamhane
Touching portrait of an aspiring singer of Indian classical music and his journey to master his art.

The Disciple is showing at the 58th New York Film Festival on October 4, 2020. Buy tickets to the virtual theater here.

Like a ballerina or a concert pianist, vocalists of Indian classical music live in a world of others who engage in this serious art form and perform before small audiences of devotees. Aspiring singers apprentice themselves to teachers whom they consider to be their gurus.

This is the world that Sharad Nerulka (Aditya Modak) grew up in, longs to excel in, and is determined to preserve. He wants to follow in his father's footsteps and become a practitioner of the centuries-old Khayal music tradition. His father (Kiran Yadnyopavit) and his current guru (Arun Dravid) both were taught by a woman singer who was such a perfectionist she never allowed her performances to be recorded. But Sharad does have some tapes in which she (Sumitra Bhave) talks about her philosophy of music as being a spiritual vocation. In scenes of him riding his motorcycle to and from practice sessions, we hear her voice seeming to propel him forward. 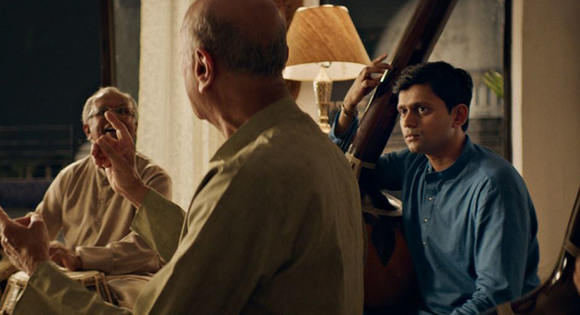 Hindustani music is not easily mastered, it turns out. Flashbacks show Sharad as a boy trying to copy his father's singing In one of the opening scenes, he plays the sitar in the background as his own teacher enchants the crowd. Projecting a mixture of admiration and envy, we can almost hear him asking, will I ever be this good?

As competitions, concerts, and group classes go by, Sharad has moments of doubt and disappointment. He becomes his guru's caregiver and a teacher of classical music in a school. By the end, his perseverance proves to be his strongest talent, something we as viewers can both admire and emulate.