Directed by Max Barbakow
A romantic comedy about two people forced to really live in the present moment.

"Comedy is simply a funny way of being serious."
-- Peter Ustinov

We are always on the lookout for comedies that take us through familiar situations and give us a new perspective on them. And while what happens to the characters in Palm Springs is not likely to happen to any of us, we still recognize what they are feeling.

Director Max Barbakow and writer Andy Siara begin this frolicsome, witty, and quite wonderful romantic comedy at a wedding in Palm Springs, California. The lead characters are Nyles (Andy Samberg), the boyfriend of a bridesmaid, and Sarah (Cristin Milioti), the bride's eccentric sister. The ritual of marriage serves as a gateway to a variety of feelings and fantasies about relationships, love, disappointment, and risk.

After Nyles saves Sarah the embarrassment of giving a speech at the wedding when she's already quite drunk, they strike up a conversation and eventually go out into the desert surroundings for a little romance. Then something inexplicable happens when she follows him into a cave. It turns out that Nyles has for some time been stuck in a time loop, a la Groundhog Day, reliving the day of the wedding over and over again; now Sarah does too. 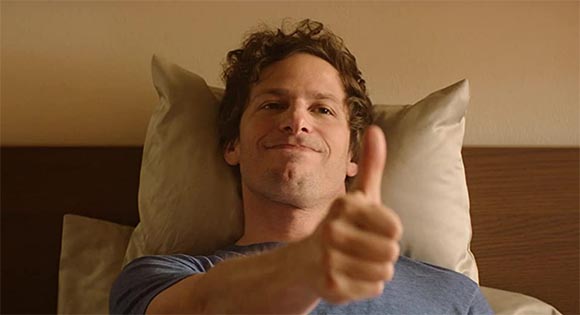 Every time these two fall asleep, they wake up on the same morning. Even though they may not want to, they are forced to live in the present moment. Sarah tries to escape by driving home to Texas, but alas, wakes up in Palm Springs again. Nyles, a goofball and a gadfly, tries to show her the advantages of being immortal, like not dying in an accident and being able to be silly in a biker bar with no consequences. They hang out in the pool at a house where the owners are gone and for sure aren't coming back during this day.

Living up to the promise that this film is a romantic comedy, most of these situations are hilarious with Samberg and Milioti proving to have great comic timing and also good chemistry. As Sarah warms to Nyles, they begin to spend more time together and fall in love. One magical night, they see some dinosaurs walking across the desert. 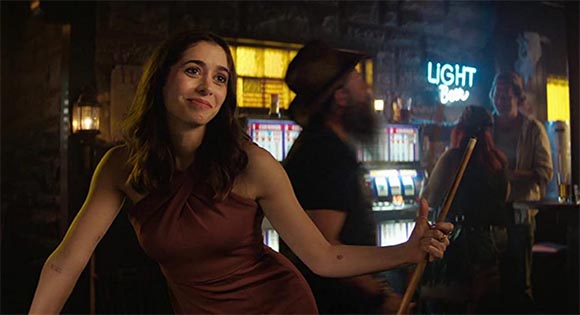 Still, Sarah is determined to find a way out of the loop and wants Nyles to come with her. Amidst the absurd situations are moments when these two must deal with questions of commitment and even the meaning of life. Why not stay in the loop, Nyles suggests, rather than go back into time where there is death and taxes and climate change to deal with. 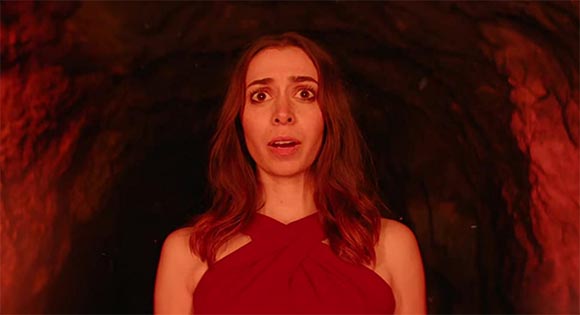 When it appears they have a chance to escape the time loop by taking a big risk, we were reminded of the Joe Versus the Volcano where two valiant souls find new life by taking a leap of faith. And as we did in that prior film, we found ourselves wondering if we would be able to do the same.

Director Max Barbakow and screenplay writer Andy Siera end Palm Springs in an open-ended way so we can draw our own conclusions as to what happens to Sarah and Nyles. As for the dinosaurs in the desert, they just keep marching on.

R - sexual content, language throughout, drug use, some violence