Directed by Lukas Moodysson
A wonderfully idiosyncratic and totally satisfying Swedish film set in a 1975 commune in Stockholm where openness to others slowly evolves as a spiritual practice.

"An intimate romantic love is like taking graduate work toward a Ph.D. in the ways of love, and many of us are hardly out of elementary school," Marianne Williamson writes in A Return to Love. During the 1960s and 1970s, communes were set up in the U.S. and elsewhere as experiments in cooperative living. These counterculture experiments offered an alternative to the nuclear family and emphasized the playful aspects of love.

Swedish writer and director Lukas Moodysson has created a wonderfully idiosyncratic and totally satisfying drama set in a 1975 commune in Stockholm. He convincingly portrays the ideals and the disappointments of a group of free-spirited individuals trying to find a sense of meaning and purpose together.

This vegetarian and anti-bourgeois commune is led by Goran (Gustaf Hammarsten), a relaxed fellow who cheers even when someone on the opposite soccer team scores a goal. He's quite tolerant when his girlfriend Lena (Anja Lundqvist) has sex with Erik (Olle Sarri), the son of a banker whose passion for Communism is all-consuming.

The equilibrium of the commune is thrown off kilter when Goran's sister Elisabeth (Lisa Lindgren) seeks sanctuary there from her alcoholic and violent husband Rolf (Michael Nyqvist). She arrives with her two children — Eva (Emma Samuelsson), a 13-year-old, and Stefan (Sam Kessel), her younger brother.

Soon a television set is installed and toy pistols are on the floor. Anna (Jessica Liedberg), who has chosen a lesbian lifestyle and abandoned her husband Lasse (Ola Norell), makes a pass at Elisabeth. A couple with sensitivities toward capitalism leaves the commune on account of the propaganda of Pippi Longstocking. Stefan and Tet (Axel Zuber), Anna's son, stage a sit-in demonstration in favor of meat. Goran, upset over the Lena's continuing sexual games, expels her from the commune.

Lukas Moodysson pokes fun at the alternate lifestyle of these freethinkers but at the same time demonstrates an abiding affection for them. Even more amazing, he gives screen time to the reformation of Elisabeth's errant husband who makes a genuine effort to give up alcohol and to reconcile with his family.

Goran, in a mystical tribute to oatmeal, demonstrates the genuine hospitality of the commune toward outsiders. The final scene of an impromptu soccer game in the middle of winter is a perfect image of an expansive and relaxed community. Of course, the lilting music of Abba perfectly catches and conveys the playfulness of the movie as a whole. 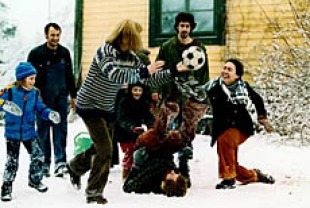