Directed by Colin Nutley
An enchanting Swedish film about the unusual love affair between a tongue-tied farmer with great nurturing skills and his strikingly beautiful housekeeper.

When Olof (Rolf Lassgård), a shy and isolated farmer in rural Sweden, puts a personal ad in the local newspaper, he has no idea how it will set in motion profound changes in his life. Since he can't read or write, a receptionist helps him fill out the form: "Lonely farmer, 39, own car. Seeks young lady housekeeper. Photograph appreciated."

The person who turns up to apply for the job is Ellen (Helena Bergström), a strikingly beautiful woman who is reticent to reveal much about herself. Olof is immediately rendered helpless and dumbfounded in her presence. When she agrees to take the position, he gives her the room where his mother died nine years ago.

Ellen, in turn, seems both mystified and appreciative of Olof's kindness, the way he consistently tends to her needs and puts his ego aside. There is something unusual about this overweight and tongue-tied farmer that intrigues her. Perhaps it is his skills as a nurturing person.

Olof's best friend Erik (Johan Widerberg) is a well-traveled 27-year-old who's been to America and even lived in Memphis for several years after a stint in the merchant marine. He's a heavy gambler and Olof has loaned him a lot of money, which he hasn't paid back. Erik, a truly self-centered male, finds himself torn between two strong feelings in regard to Ellen: he's jealous that she's replaced him in Olof's affections, and he's immensely disappointed that she doesn't want to sleep with him.

At a spontaneous midsummer night evening at the farm, Olof drinks too much and falls asleep giving Erik a chance to make his move with Ellen. The two of them realize their intense dislike of each other. No wonder Erik finds it easy to gossip about Ellen with the nosy minister at the church where Olof sings in the choir.

Director Colin Nutley (House of Angels) has adapted this engaging drama from a short story by English writer H.E. Bates. As the Dalai Lama has noted, the spiritual practice of kindness can work wonders in all human relationships — especially as individuals become more and more intimate. In the presence of Ellen's beauty, Olof slowly loosens up and begins to bloom. All is well until Erik's search into her past yields a secret that threatens to undo their new life together in love.

Nutley's slow pacing of Under the Sun is perfectly in sync with the lazy days of summer in rural Sweden. The melodic music by the Chieftans provides just the right aural milieu for the transformation of Olof and Ellen's lives. This enchanting Swedish drama was nominated for the 2000 Academy Award for Best Foreign Language Film. 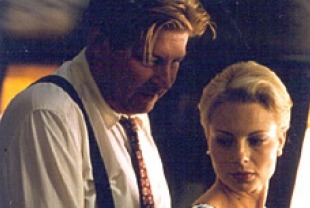