Directed by Joe Johnston
A high-tension thriller that proves fearsomeness is built into the universe.

Dr. Alan Grant (Sam Neill) is a paleontologist whose latest findings reveal that prehistoric raptors were "fierce, intelligent, and socially sophisticated" creatures with highly developed communications skills. He, however, is not so blessed. When introduced by his assistant Billy (Alessandro Nivola) to two rich Americans, Paul Kirby (William H. Macy) and his wife Amanda (Tea Leoni), who want to fly low over Isa Sorna — the site from The Lost World: Jurassic Park — in order to see some dinosaurs, he tries to say no but ends up saying yes when a large check is thrown his way. It will pay for additional research in years to come, he rationalizes.

Only after their plane crashes on Isla Sorna does Dr. Grant learn the real reason for their journey. The Kirbys need to rescue their son Eric (Trevor Morgan) who was involved in a parasailing accident over the island. The newcomers are given a nasty welcome by Spinosaurus aegyptiacus, who toys with the plane's fuselage and tries to chomp everything in sight.

Steven Spielberg, who directed the first two Jurassics, has handed the director's baton to Joe Johnston (October Sky), and he is smart enough to emphasize again and again the one emotion that underlies this successful film franchise — gut-wrenching fear. He may even have read James Hillman who has wisely noted: "Fearsomeness comes with the universe, belonging to cosmic predation. Everything eats away at everything else in an intricate interlocking system from which there is no escape."

When the intruders on Isla Sorna are attacked by a band of raptors, they run for their lives. Walking through a large contraption that looks like a birdcage, they soon learn it is home to some flying monsters. Again Dr. Grant and his companions run for their lives. And facing a malevolent Spinosaurus who rises out of the water to attack them, our much besieged band do the next best thing to running — they call home for help on their satellite phone. When Eric's inept parents are finally reunited with him, the kid turns out to be the most resourceful one in their group. He's learned a few survival tricks while waiting for them.

Jurassic Park III vividly makes the point that fearsomeness is built into the universe. 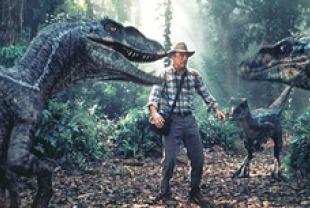