Directed by Carroll Ballard
Celebrates the creative ways human beings and animals can serve, assist, and love one another.

Fly Away Home was one of the best films of 1996. It will stir your heart, put a smile on your face, and enable your imagination to take flight.

Following the death of her mother in an automobile accident in New Zealand, 13-year-old Amy (Anna Paquin) arrives in rural Ontario to live with her estranged father Thomas (Jeff Daniels). This self-absorbed sculptor and inventor feels unequal to the task of helping his daughter cope with her grief. Amy, in turn, is resistant to any of his attempts to help her adjust to her new life.

Then a developer destroys a nearby marsh, and Amy rescues an abandoned nest of goose eggs. When they hatch they "imprint" on the first being they see — Amy — and assume she is their mother. Nurturing these fuzz balls brings this moody teenager back into the land of the living. But being a mother goose carries with it responsibilities: Amy learns that she has to teach the geese to fly and to migrate south for the winter.

Thomas, his girlfriend (Dana Delany), his nerdy brother (Terry Kinney), and a friend (Holter Graham) come up with a wild scheme involving two motorized gliders and a 500-mile trip to North Carolina. The project bonds Amy and her father together in a way that is deeply satisfying and liberating for them both.

Fly Away Home is beautifully directed by Carroll Ballard (The Black Stallion, Never Cry Wolf). The story is based on experiments being conducted to change bird migration paths when traditional routes have become dangerous or the destination habitats have been destroyed, an interesting endeavor in itself. The movie adds excitement and emotion, turning into a celebration of the creative ways human beings and animals can serve, assist, and love one another. 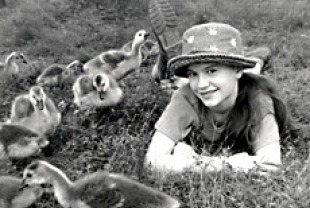 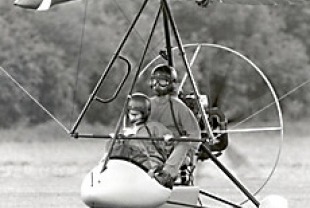