Directed by Brian Robbins
A compulsive gambler who puts his life in turnaround thanks to the help of some ghetto youth.

Conor O'Neill (Keanu Reeves) is a compulsive gambler who owes a lot of money to bookies in Chicago sports bars. His friend Jimmy Fleming (Mike McGlone), a successful investment banker, has helped him out before in tight squeezes but this time insists he earn money — $500 a week — by coaching a kids' baseball team that his corporation sponsors.

Reluctantly, Conor accepts the task. He is quickly discouraged when he discovers the ten-year-olds hail from the ghetto and are called the Kekambas, after an African tribe. Among the teams most idiosyncratic players are Miles (A. Delon Ellis, Jr.), a pitcher whose best moments come when he's listening on his headphones to rap music; Jefferson (Julian Griffith), an overweight kid with asthma; and G-Baby (DeWayne Warren), a pint-sized youngster with a huge heart.

Brian Robbins directs from a screenplay by John Gatins adapted from Daniel Coyle's autobiographical book Hardball: A Season in the Projects. The melodramatic story of Conor's inner transformation while coaching the team is predictable and brings to mind a slew of other films including The Bad News Bears.

Still, this is an enjoyable movie about the how some of us learn when we least expect it. The scenes in which Conor is exposed to the dangers of daily life in the housing projects enable him to come to a deep respect for the resiliency and courage of these African-American kids. This ragtag band of street-smart boys serve as a spiritual teacher for the gambler. He discovers a life of meaning beyond the adrenaline pumping rush of winning a bet. And just to add a little more sugar to this medicine, Conor's burgeoning romance with an English teacher (Diane Lane) further bolsters his efforts to put his life in turnaround.

The DVD includes commentary by the director and writer, a "making of" featurette, the trailer, and the music video "Hardball." 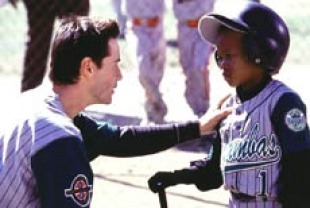