Directed by Richard Kelly
Probes the high tide of mystery in the life of a troubled teenager who is both enchanted and frightened by sexuality, the dream world, ideas, adults, and imagination.

Adolescence is a heady time when we first confront the high tide of mystery in our lives. We are both enchanted and frightened by elements of the unknown in sexuality, wild ideas, the duplicity of adults, the magic of the dream world, and the power of imagination. Much of the time, we feel like we're walking in the dark on unfamiliar ground. And then, of course, there is the challenge of dealing with our shadow, those unappealing aspects of ourselves we'd prefer to keep hidden.

Donnie Darko (Jake Gyllenhaal) is a very smart and very troubled teenager who lives with his parents and two sisters in a suburban town in 1988. Dr. Lillian Thurman (Katherine Ross) has him on a heavy regimen of drugs to treat his schizophrenia. Unbeknownst to her, Donnie is following the instructions of Frank (James Duvall), a rabbit-faced guide who has informed him that the world is going to end in 28 days. Every night Donnie sleepwalks his way into strange adventures. On one of these excursions, he leaves his house just before a jet engine falls from the sky and smashes into his bedroom.

All the students at school think it's really cool how Donnie narrowly escaped death. His parents (Holmes Osborne and Mary McDonnell) are uneasy about their son. However, his weirdness is quite appealing to Gretchen Ross (Jena Malone), a new girl in town. His favorite teacher, Ms. Pomeroy (Drew Barrymore), respects the spark of nonconformity and independent thinking she sees in Donnie, especially since he's the only one who gets the point in a controversial story by Graham Greene they are reading.

"There is no map with which to discern territories of the invisible. It is without texture," John O'Donohue has written in Eternal Echoes. "This is probably why we long to ignore the invisible. There is a sense in which the invisible is the home of fear. We tend to be afraid of what we cannot see or know." Donnie Darko, on the other hand, is not afraid of the invisible. Writer and director Richard Kelly salutes his brave attempts to explore the awesome mysteries of life and death.

Jake Gyllenhaal, who was so good in October Sky, puts in a top-notch performance as a nonconformist boy who is angered by hypocrisy. Donnie is the only one in town who sees through the slick spiel of Jim Cunningham (Patrick Swayze), a self-help guru who is the darling of Kittie Farmer (Beth Grant), a reactionary teacher and community activist for censorship. He preaches "love not fear," but he's a pretty scary fellow himself.

The teenager becomes interested in dreams and alternate worlds after he has a talk with Dr. Monnitoff (Noah Wyle), a science teacher, about time travel. He puts him on to a reclusive old woman who wrote a book about the subject years ago.

Donnie Darko is only recommended for the adventuresome moviegoer who has a high tolerance for mystery. Another measure of your possible interest in this unusual movie is whether or not agree that "cellar door" are the most beautiful words in the English language. If you do, open that door and walk right in to Donnie Darko. 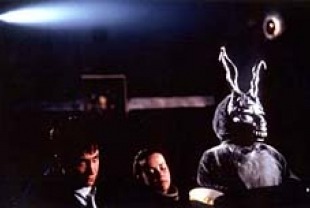 R - language, some drug use, violence