Directed by Jean-Pierre Jeunet
An immensely entertaining French film about an imaginative young woman who has a wonderful capacity for doing acts of kindness.

Kindness is sometimes viewed as one of those effete virtues lacking in charisma or clout. Yet it encompasses such meaningful activities as small expressions of love, words of encouragement, various kinds of etiquette, and a general largess. Amélie is a buoyant French film directed by Jean-Pierre Jeunet. This creatively energized film presents an unforgettable portrait of a woman who demonstrates a remarkable talent for the spiritual practice of kindness.

In a ten-minute introduction to this delightful fable set in Paris, a witty and omniscient narrator (André Dussolier) gives us an overview of Amélie's origins and the forces that shaped her soul and imagination — an extraordinary birth; the strange antics of her father, a doctor; the bizarre accidental death of her mother at Notre Dame Cathedral; her schooling at home; and her childhood secret world of enchantment.

After setting out on her own, Amélie (Audrey Tautou) lands a job as a waitress at an old-fashioned restaurant in the Montmartre district of Paris. There she charms the regulars and works under the supervision of Suzanne (Claire Maurier), the owner. On August 31, 1997, Amélie, upon hearing of the death of Princess Diana, discovers a box hidden away in her apartment containing a boy's treasured possessions. She decides to return these to the owner. With a little help from Dufayel (Serge Merlin), an elderly painter, she tracks the now middle-aged man down and savors the tearful moment of his reunion with the past. Rejuvenated by this act of kindness, Amélie vows to do more good works.

She comes up with a clever and funny way to get her reclusive father (Rufus) out of his house and into the adventure of travel. She plays matchmaker for Georgette (Isabelle Nanty), a lonely tobacconist at the restaurant, and Joseph (Dominique Pinon), a customer who's been jilted. She lifts the spirits of her building's sad concierge (Yolande Moreau) and stands up for Lucien (Jamel Debbouze), an Arab clerk in a grocery store who's constantly being shamed in public by his authoritarian boss (Urbain Cancellier).

Students of ethical behavior have identified a phenomenon called the "helper's high" — a feeling of well-being and buoyancy experienced by those who are kind to others. Amélie experiences this bliss. It's not enough, though, when she wants to find a way to express her amorous feelings for Nino (Mathieu Kassovitz), an eccentric who collects discarded ID photos and holds down jobs at a porno shop and at a carnival where he's a skeleton in a tunnel of horror. Dufayel (Serge Merlin), a painter in her building who has an obsession with Renoir's work, helps her find a way to connect with this soulmate.

Jeunet's direction makes exquisite use of Paris as a delectable playground for Amélie's missions of mercy. The screenplay he co-wrote with Guillaume Laurant has sparkle, fizz, and incredible ingenuity. From the magical opening to the enchanting closing scenes, Amélie is something special — a foolproof way to lift your spirits!

The DVD is a two-disc set. The first has the widescreen presentation of the film in French or with English or Spanish subtitles plus an informative and quite amusing audio track by director Jean-Pierre Jeunet. The second disc concentrates on interviews and a “Q&A” session at the American Cinematheque during which the director and others on the production team talk about the look of the film, its inspiration, and some of their favorite sequences. There are also outtakes, photo albums, and a bonus short called “The Garden Gnome’s Travels.” 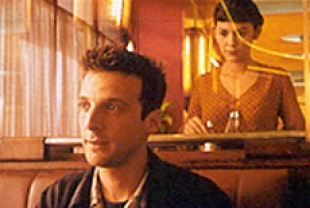