Directed by Todd Field
A daring and unsettling film about a few of the complex and taboo emotions of grief.

Grief plunges the bereaved into a series of wrenching, contradictory, and chaotic emotions. The deep pain felt at the death of a loved one may be followed by numbness alternating with acute sensitivity. Sleepless nights are followed by bleak mornings when it is impossible to concentrate. While trying to understand the reality of a loss, those in grief are plunged into a long and oftentimes devastating encounter with themselves.

In the Bedroom is a daring and unsettling film about a few of the complex and taboo emotions of grief. In his debut as a film director, actor Todd Field (Ruby in Paradise, Eyes Wide Shut) has made a mesmerizing film with Academy Award-caliber performances by Tom Wilkinson and Sissy Spacek.

In the fishing town of Camden, Maine, Frank (Nick Stahl) is enjoying his last summer before graduate school working part-time as a lobsterman, which was his grandfather's vocation. He wants to be an architect, and his parents believe that he will go on to do great things.

That is why his domineering mother Ruth (Sissy Spacek), a choral music teacher, is so upset about Frank's relationship with Natalie (Marisa Tomei), a thirtyish single parent with two young boys. Ruth is convinced that this convenience store clerk with working-class ways is not the right woman for her son. His father Matt (Tom Wilkinson), a doctor, believes that the relationship is nothing more than a summer fling.

Although Natalie is separated from her husband, Richard (William Mapother), whose father owns the town's cannery, he is still closely monitoring her activities and deeply jealous of her love affair with Frank. One day he explodes and starts to beat up Natalie. Frank appears on the scene, tries to intervene, and is shot dead by Richard.

Matt and Ruth are plunged into grief. They are unable to cope with the swift and sudden loss of their only child. She retreats from the world, isolating herself at home, smoking and mindlessly watching television. He goes to the office but finds himself obsessed with the fate of the man who killed his son. His feelings of impotence and rage intensify when Richard is released on bail and there is talk of only a five-year sentence for manslaughter. When Ruth sees her son's murderer in a store, she is completely unhinged. Together Matt and Ruth try to deal with some of the cruel comments uttered by townsfolk and even close friends. This makes them feel even more exposed and vulnerable.

Todd Field, who wrote the screenplay with Rob Festinger from a short story by the late Andre Dubus, zeroes in on the shadow side of grief where individuals are brought face-to-face with their major internal demons, which they have previously been able to keep under wraps. At one point Ruth describes her grief as coming "in waves and then nothing — like a rest in music. No sound but so loud."

In one of the most terrifying scenes, the soft-spoken Matt and the judgmental and controlling Ruth go at each other in a vicious argument that sends them deeper into despair. The scary and grim finale of In the Bedroom vividly reveals how white-hot rage born in grief can set off a chain of events causing misery to all involved. 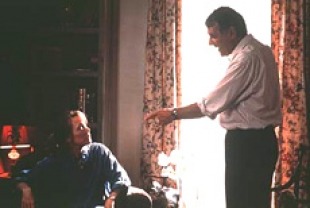