In the Bedroom A Values & Visions Guide

A Discussion Guide to the movie about a couple plunged into the chaotic emotions of grief after their son is murdered.

Grief plunges the bereaved into a series of wrenching, contradictory, and chaotic emotions. In the Bedroom (2001) is a daring and unsettling film that explores a few of the complex and taboo emotions of mourning. Todd Field, for his debut as a feature film director, has fashioned a nuanced and realistic screenplay with Rob Festinger from a short story by the late Andre Dubus.

Much of the suffering in our lives is brought about not by the actions of external enemies and evil doers but by the violence, ignorance, and resentment within us. Forgiveness offers a way out of this self-created prison. But for many of us, it is a difficult path to travel given our cultural training in the idea of retribution (an eye for an eye) and our acceptance of the psychological shibboleth of closure.

The questions and exercises in this discussion guide are organized around some of the serious themes of this drama — calamity, murder, anger, hurt, listening, evil, and ways to regard our enemies.

In the Bedroom runs 130 minutes and is rated R for some violence and language. For our review of the film and a plot synopsis, click here.

Columnist Sidney J. Harris has written: "Nobody knows himself until he has come face to face with calamity. It is only in crises that we learn our true identity; . . . Many have gone through life thinking they were strong when they were only safe." 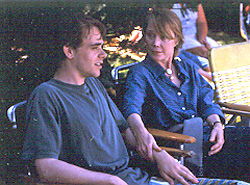 2. THE MURDER OF A LOVED ONE

"Death from almost any cause, even from an accident, can somehow be dealt with rationally. But if the death is caused by murder, there is a collapse in the heart and soul that cannot be disabled," Antoinette Bosco observes in Choosing Mercy.

In her book Companion Through the Darkness: Inner Dialogues on Grief, Stephanie Ericsson writes: "Anger does not simply go away if we deny it. It finds a place to reside, either in our behavior or in our bodies, or both. The longer we cap it off, and seal it from the outside world, the more it festers and grows within. Rage is white-hot anger." 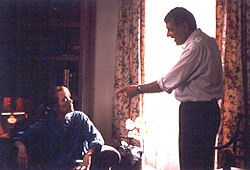 "Compassionate listening is a very deep practice," Thich Nhat Hanh writes in Anger: Wisdom for Cooling the Flames. "You listen not to judge or to blame. You listen just because you want the other person to suffer less. The other person might be our father, our son, our daughter, or our partner. Learning to listen to the other person can really help her to transform her anger and suffering."

5. BREAKING THE LOGIC OF HURT

"Forgiveness is one of the really difficult things in life. The logic of receiving hurt seems to run in the direction of never forgetting either the hurt or the hurter. When you forgive, some deeper, divine generosity takes you over. When you can really forgive, then you are free . . . only the grace of forgiveness can break the straight logic of hurt and embitterment," John O'Donohue notes in Eternal Echoes.

"When we are victims of radical evil, we are not asked to forgive the evil act. We are asked to remember that the perpetrator, even though trapped for now in the evil, is nonetheless a child of God. Even when we cannot yet forgive and release that other child of God, and perhaps cannot do so for a long time, we can deliver that person into God's hands, saying, 'Loving God, at this time my hurt is so deep and my heart is so devastated with pain that I cannot even begin to forgive this person. It is enough for me now to know that my wounder is in your hands, even as I am, and with you there is perfect understanding and recompense for all my pain. When the time is right, help me to begin my journey of healing and release," Flora Slosson Wuellner writes in Forgiveness: The Passionate Journey.

7. STUDY PARTNERS IN THE NEXT LIFE

"In the next life, your enemy will be your study partner — because he can teach you the most. Jews and Palestinians — why are they afraid of each other? Make a list. There's a lot of information here. If we mend our relationship with our enemies, we can learn," Rabbi Nilton Bonder has observed.