Directed by Lasse Hallstrom
The graceful and sensitive portrait of the ripening of a weak-willed man after he is nourished by a place and some special people.

Lasse Hallström, the accomplished Swedish film director who now lives in the United States, has a fondness for stories about odd mavericks who yearn for a community where they can find both acceptance and independence. This has been a major motif in My Life as a Dog, Cider House Rules, and Chocolat. It is one of the central themes in Hallstöm's graceful, sensitive, and morally rich screen adaptation of E. Annie Proulx's Pulitzer Prize-winning 1994 novel.

Quoyle (Kevin Spacey) is a weak-willed man with low self-esteem who works as an ink setter at the Poughkeepsie News. He's married to Petal (Cate Blanchett), a manipulative, cruel, and totally self-centered hedonist. When she runs off with another man, she takes their six-year-old daughter Bunny (Alyssa Gainer) with her. Petal is killed in an automobile crash after selling her daughter on the black market for $6,000. Fortunately, the police bring Alyssa back to her father.

Quoyle has just returned from his parents' funeral, who committed suicide, when his Aunt Agnes (Judi Dench) arrives to pay her last respects to her brother. She suggests that he and Bunny join her in returning to Newfoundland, their ancestral home. Still in grief, Quoyle doesn't have the energy to say no and so they head off to a faraway place that he knows nothing about.

The rundown house outside the fishing outport of Killick-Claw is tied down like a tent with four cables so it won't blow away in one of the many fierce winter storms. This decrepit ancestral home hasn't been inhabited for 44 years. Bunny, who still is grieving for her mother, has a recurring dream of a skinny man and a white dog outside the window. Agnes calls her "sensitive," a term used in the town for those with psychic abilities.

Quoyle finds work, thanks to his family name, at the Gammy Bird, a weekly newspaper owned by Jack Buggit (Scott Glenn), an avid fisherman who's out in his boat more than he's in the office. Since there is no need for an ink setter, Quoyle is made a reporter covering the news about shipping in the area as well as car wrecks. He wins his own column after writing a popular piece on a boat in port once owned by Hitler. Quoyle is befriended and taught the tricks of the trade by Billy Pretty (Gordon Pinsent) who is in charge of the home page. The other members of the staff are Beaufield Nutbeem (Rhys Ifans), who covers international news, and Tert Card (Pete Postlethwaite), the managing editor who is threatened by Buggit's royal treatment of Quoyle.

While most of the townsfolk have seawater in their veins and are always asking this newcomer when he's going to get a boat of his own, Quoyle is afraid of the water after having nearly drowned as a boy when his father tossed him into a deep lake in order to teach him how to swim. He is ridiculed for the motor boat he eventually purchases and, as the locals predicted, its seaworthiness fails Quoyle in a mishap in dangerous waters.

Trying to keep his feet firmly planted on the ground in Killick-Claw is no easy matter. Quoyle learns a lot of unsavory details about his ancestors from Billy Pretty who claims they were pirates who at one time were run out of the community. They actually pulled the ancestral home by rope across the ice to its present location. The past troubles Quoyle. He tries to find some solace from its pressures in a friendship with Wavey Prowse (Julianne Moore), a widow who runs a daycare center where Bunny befriends her son Herry (Will McAllister), a "special child."

Lasse Hallström brings The Shipping News to the screen with all its essential bittersweet qualities intact. The screenplay by Robert Nelson Jacobs (Chocolat) vividly conveys the quirkiness of the community where people munch on squidburgers and eat seal flipper pie; gossip about their neighbors, yet band together when someone needs help; and love and fear the tremendous power of the sea and the weather. Everyone in town seems to harbor some dark secret, like the characters in the television series Northern Exposure, but they give each other the room to lick their own wounds and to come out of themselves whenever they're ready. Or as Aunt Agnes puts it: "We face up to the things we fear because we can't go around them."

It is a deeply satisfying experience to witness Quoyle's transformation from a doormat to a sensitive father, a caring relative, and a talented reporter. Best of all is how he slowly and soulfully nurtures his friendship with Wavey into a loving relationship that enables them both to move beyond grief to a new and unknown adventure.

The DVD includes an audio commentary providing insights into the thinking of director Lasse Hallstrom, screenwriter Robert Nelson Jacobs, and producers Linda Goldstein Knowlton and Leslie Holleran. There is also a “behind the scenes” featurette with comments from the stars and a photo gallery. 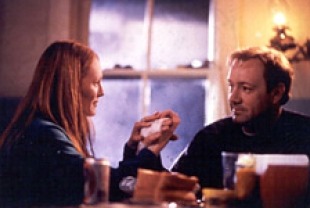