Directed by Michael Mann
Brings the larger-than-life boxing champion down-to-earth in a fascinating look at an astonishing decade in his amazing career.

Michael Mann's (The Insider) ambitious, intense, and panoramic screen portrait of Muhammad Ali covers a decade in the life of the Louisville slugger beginning in 1964, when the young and cocky boxer then called Cassius Clay (Will Smith) surprised everybody (he was a seven to one underdog) by taking the heavyweight championship from a glowering Sonny Liston, until the famous "Rumble in the Jungle" when Muhammad Ali regained the championship by knocking out George Foreman in Zaire.

Mann demonstrates his virtuosity for mood making with a smashing introduction to Clay's youth and entrance into boxing all set to a medley of soulful songs by Sam Cooke. We know we're in the hands of a filmmaker who wants us to empathize with Ali as he struggles to find his true identity as the "peoples' champion."

The boxer surprises his father (Giancarlo Esposito) and close friend photographer Howard Bingham (Jeffrey Wright) by converting to Islam and changing his name. Although Ali had respect for Malcolm X (Mario Van Peebles), he repudiated him when they met up in Africa by saying, "You shouldn't have quarreled with Elijah Muhammad" (Albert Hall). The heavyweight champion demonstrates his zeal for the puritanical way of life by divorcing his first wife Sonji (Jada Pinkett Smith) for refusing to conform to strict Islamic dress standards for women.

The most complicated and difficult battles of Ali's life ensued when he took on the U.S. government with his refusal to join the army during the Vietnam War saying: "Ain't no Viet Cong ever called me nigger." Ali was prosecuted for draft dodging, and the boxing commission took away his license. He was idle for 3 1/2 years losing millions of dollars in purses and endorsements at the peak of his career. In 1971 the Supreme Court ruled that the government had acted improperly.

Some of the film's finest moments draw out the many sides of Ali — his touching courtship of his second wife Belinda (Nona Gaye), a devout Muslim; his delight at being interviewed repeatedly by Howard Cosell (Jon Voight); his close relationship with his corner man and motivator Drew "Bundini" Brown (Jamie Foxx); his desperate meeting with Joe Frasier (James Toney) to get him to promise to fight him; his odd moment of playing second fiddle to fight promoter Don King (Mykelti Williamson) at a press conference; and his affection for the children of Africa as he runs through the streets of a poverty stricken town just before his fight in Zaire.

One of the few remaining icons of the 1960s, Muhammad Ali remains larger than life in our time. Mann's portrait of the boxer with the lightning fast jab brings him down to earth. As this always-fascinating biodrama reveals, some of his most difficult fights were outside the ring. Here Ali stood his ground saying at one time with determination and pluck: "I ain't got to be what anyone else wants me to be." Spoken like a true representative of the 1960s. 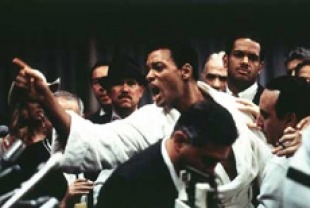