Directed by Lawrence Kasdan
A romantic comedy that offers an engaging look at the many meanings of love and change in the lives of a travel guidebook writer and a dog trainer.

Macon (William Hurt) and Sarah Leary (Kathleen Turner) live in Baltimore, Maryland, where he writes travel guidebooks for businessmen who want to experience the familiar while away from home. Since the tragic death of their young son, who was killed in a robbery at a fast-food restaurant, the Learys have withdrawn from each other. Sarah decides to move out and start over again on her own.

When Macon breaks his leg, he moves in with his reclusive siblings — Rose (Amy Wright), Porter (David Ogden Stiers), and Charles (Ed Begley, Jr.) who live in their grandparents' large house. They stick together and ignore the outside world. Macon is comfortable there until he meets a dog trainer named Muriel (Geena Davis) at the kennel where he leaves his pet during a business trip.

Muriel pulls Macon out of his cocoon and into her slipshod life. A single parent, she has a zest for life. Macon is drawn to her energy and enthusiasm. He moves in with Muriel and her son Alexander (Robert Gorman), a pale boy with many allergies. Then, Sarah reappears in Macon's life wanting to save their marriage.

If you stick with its pokey characters, this romantic comedy will cause your heart to turn a few somersaults in its final moments. Director Lawrence Kasdan has done a top-drawer job adapting Anne Tyler's best-selling novel for the screen. In a quirky but convincing way, the drama presents the messiness and unpredictability of love in a world inhabited by people who insist on eating potatoes every night for dinner, who have trouble expressing their emotions, and who dress exotically and dream of Paris in the springtime. Mignon McLaughlin has observed that it is the most unhappy people who fear change. By the end of The Accidental Tourist, you'll hurrah Macon's one small step toward happiness. 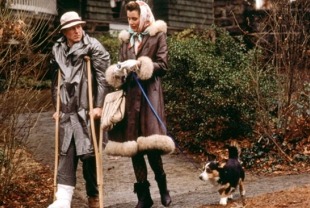