Directed by Nanni Moretti
A compelling anatomy of grief and the difficult process of adapting to loss.

Giovanni (Nanni Moretti) is a psychoanalyst who lives in a northern Italian seaside city with his wife Paola (Laura Morante), his daughter Irene (Jasmine Trinca), and his son Andrea (Giuseppe Sanfelice). In his office located next to their apartment, he listens to the problems of a lonely woman, a suicide-prone man, and a fellow obsessed with pornography.

On the home front, Giovanni is troubled by an incident at the school for which Andrea has been suspended for stealing. Although his son claims he's not guilty, his father doesn't believe him. He also chastises the boy for not possessing the need to win in a tennis match. On a morning when Giovanni is set to go jogging with Andrea, he's called away by a client in an emergency. While he's gone, Andrea dies in a diving accident.

The family descends into a miasma of grief. Paola howls out her loss in the bedroom; Irene, a basketball player, gets into a scuffle on court; and Giovanni becomes very silent. He's plagued with regret that he didn't say no to the client who called him on the day he had set aside for time with Andrea.

The Son's Room, which won the Palme d'Or at the 2001 Cannes Film Festival, is a compelling anatomy of grief and the process of adapting to the losses in our lives. Writer and director Nanni Moretti (Dear Diary) has done a remarkable job probing Giovanni's struggle with the anguish, guilt, and sadness that descends over him like a fog.

In a series of small incidents, the psychoanalyst tries to alleviate his pain by expressing anger at the words of a priest in a mass for Andrea's friends, by losing himself on a ride at a garish fairground, by exhausting himself in solitary runs, by asking questions at a diving store about the equipment his son used, and by going to a record store to purchase a tape for Andrea. In the touching closing scenes, the family gets together with Arianna (Sofia Vigliar), a girl Andrea son met at a summer camp. Through her, they feel linked to him and his emotions near the end of his life. 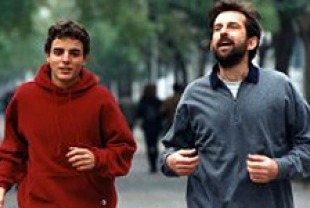