Directed by Arthur Penn
Charts one young man's coming-of-age during the 1960s amidst a swirl of changes.

Danilo Prozor (Craig Wasson) and his mother (Elizabeth Lawrence) came to East Chicago during the 1950s from Yugoslavia. The boy's father (Miklos Simon) had already been in America for years working at a steel plant. They were not a close family, and Danilo sought affirmation elsewhere.

He finds it during the 1960s within a small circle of high school friends: David (Michael Huddleston), a pudgy Jewish fellow whose father is a mortician; Tom (Jim Metzler), a handsome womanizer; and Georgia (Jodi Thelen), a free-spirited girl who considers herself the Isadora Duncan of East Chicago. She dreams of becoming a dancer and traveling all over the world; her male friends are too slow for her. Georgia tries to seduce Danilo but he's not ready. At the graduation picnic, she makes love to Tom. That picnic is marked by another event: there is an outbreak of racism as several rowdies throw rocks at a black member of the class.

Danilo goes off to college and befriends Louie (Reed Birney), his disabled roommate who is slowly dying. They return to East Chicago for Georgia's wedding to David. She is pregnant with Tom's child, and he is enlisting. Meanwhile, Danilo falls in love with Louie's sister Adrienne (Julia Murray). But her incestuous father (James Leo Herlihy) brings tragedy to their wedding day. Shortly afterwards, Louie's mother (Lois Smith) tells Danilo that her son has died.

In New York City, Georgia has started a new life as a flower child. Danilo wants them to try living together but she is too wrapped up in herself. Eventually he moves to a Pennsylvania town and works in a steel mill.

Near the end of the decade, the four friends are reunited in their home town. Tom is married to a Vietnamese woman and has a family; David has found another wife; and Georgia, exhausted from all her adventures, is raising her child alone. In the film's turning point scene, Danilo drops his noncommittal stance and outsider's detachment and punches out a redneck cop — the same man who led the attack upon the black student during the graduation picnic. Danilo and Georgia decide they will marry, and he will accept a teaching position.

Steven Tesich's outstanding screenplay sets before us the private journey of one young man's coming of age during times of great public upheaval. Harold Rosenberg has written, "The people of an era must either carry the burden of change assigned to their time or die under its weight." Danilo's spirit almost dies under the weight of change that swirls around him — the civil rights protests, the counterculture, and the antiwar movement. The 1960s forced individuals to declare themselves and to find out who they really were or had the capacity to become. By the end of the movie, Danilo takes sides, reconciles himself with his father, and acts on his long repressed love for Georgia.

Four Friends is Arthur Penn's finest movie since Alice's Restaurant. In this rambling and expressionistic story, he has captured all the confusion and excitement of an era. Danilo’s personal growth through this story is worth witnessing and affirming. And whereas quite a few other films have missed the mark in their attempts to show us the decade, this one succeeds convincingly. Four Friends presents the 1960s not as a memory, a polemic, a utopia, or a quaint reference point but as they survive within us today. 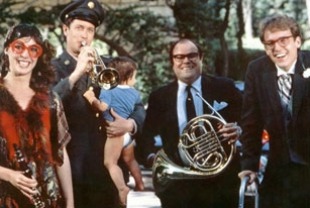