Gabe (Dennis Quaid) and his wife Karen (Andie MacDowell) are very successful food writers and gourmands. They have two children and take their marriage vows very seriously. Twelve years ago they introduced Beth (Toni Collette), an artist, to Gabe's college buddy Tom (Greg Kinnear), an attorney. Now, having just returned from ten days in Italy, they cook up a lemon-almond polenta dessert for their best friends. But only Beth shows up, eventually breaking down and confessing that Tom is leaving her for a stewardess.

Karen is filled with righteous indignation at Tom's betrayal of his wife. She also feels anger at being kept in the dark about the problems in their marriage. After missing a plane at the airport, Tom returns home and learns that Karen has told their friends about his infidelity without giving his side of the story. He arrives at Gabe's house later in the evening to tell the truth about what really happened.

Norman Jewison directs Donald Marguiles' Pulitzer Prize-winning play with panache, making the most out of the drama's verbal fireworks and emotional surprises. This beautifully acted film is a tour de force with its substantive insights into friendship, marriage, and divorce. No doubt everyone will find themselves identifying with aspects of each of the four main characters — Karen's principled aversion to adultery; Gabe's wounded pride that his friends seemed to be play-acting for years in their relationship; Beth's disappointment in her husband; and Tom's crestfallen discovery that no one really cares about his struggle to find happiness in a new life.

Many of the tensions between these four individuals are flushed out in scenes pairing the two women and then the two men. Here Dinner with Friends tallies up the catastrophic effect of Beth and Tom's breakup on Gabe and Karen. Looking better than ever, Beth at lunch announces that she has a new lover. Karen cautions her to slow down and take it easy. Beth responds: "You can't control everything. . . you love it when I'm a mess. Every Karen needs a Beth." It is clear that their friendship has evaporated and they are on separate roads.

Later, Tom catches up with Gabe and brags about the transformation of his life — jogging early in the morning and sex in the shower. "I'm a boy toy at 43," he tells his best friend. But Gabe is pained that he seems to have so little regard for his familial obligations or the patience required for the long haul of a marital relationship. Tom responds by criticizing the generation of their parents who remained in miserable relationships for 50 years. 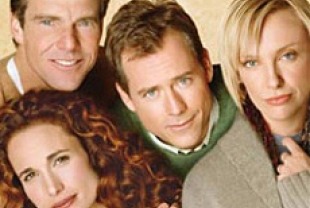