Directed by B.Z. Goldberg, Carlos Bolado, Justine Shapiro
A soul-stirring documentary about the Israeli/Palestinian conflict as revealed through the voices of children who are curious about each other even in a milieu where hatred reigns supreme.

The hatred between Israeli Jews and Palestinians is deep and pervasive. Both sides have justifications for their feelings. Each clings to the belief that history and justice are on their side — not to mention God.

Prejudice is usually formed early in childhood as boys and girls inherit the rigid ideas, ideals, and political perspectives of their parents and their communities. But this process is not inevitable. The filmmakers obviously agree with the following quotation by Charles Colton, an English clergyperson: “We hate some persons because we do not know them, and we will not know them because we hate them.” They set out to help Israeli and Palestinian children get to know each us and allow us to listen in.

Between 1997 and 2000, B. Z. Goldberg, an American raised in Jerusalem who speaks both Hebrew and Arabic, and co-directors Justine Shapiro and Carlos Bolado interviewed seven children aged 11 and 13 who lived within a 20-minute distance from each other in the divided city of Jerusalem. In the initial talks with these kids, we see their firm convictions and hatreds come to the fore. Yarko and Daniel, two secular Israeli twins who are primarily interested in sports, share the fear they feel riding a bus after terrorist bombings. Sanabel, a Palestinian refugee, cries when she thinks about how much she misses her father, a journalist who has been in prison for two years without being formally charged or given a trial. Moishe, a right-wing Jewish settler, believes that God gave Jews the land but the Arabs stole it; he feels hatred for the Palestinian terrorists responsible for the death of his friend. Mahmoud lives in Jerusalem where his family owns a spice and coffee shop in the Muslim Quarter; he is passionate about the need for Palestinian emancipation. Schlomo, an ultra-orthodox Jewish boy, studies Torah 12 hours a day and doesn’t think much about politics. Faraj, a Palestinian refugee living in the Deheishe refugee camp, vows to rebuild the house his grandparents lived in before the Jews took over their village during the 1948 war.

Goldberg ups the ante when he convinces some of these kids to meet and talk about their lives. Faraj serves as host in the Deheishe refugee camp along with Sanabel and others. The guests are Yarko and Daniel. They share a meal and play soccer. At the end of the day Faraj breaks down and cries, anxious that the ties formed in this warm encounter will not last the test of time. His intimation is correct as the interviews conducted two years later reveal.

Promises is a soul-stirring documentary that has been nominated for an Independent Spirit Award and an Academy Award in the Best Documentary Feature category. It was presented on television in December 2001 as part of the “P.O.V.” series on PBS. For more about the film and an excellent overview of the Israeli/Palestinian conflict with a timeline, visit the Promises website.

Margaret J. Wheatley has observed: “It takes courage to start a conversation. But if we don’t start talking to one another, nothing will change. Conversation is the way we discover how to transform our world, together.” We’re grateful to Goldberg for this documentary and his faith in children and their ability to stay curious about each other even in a milieu where hatred reigns supreme.

The DVD has some additional footage of the children in the film, including their journey to Hollywood to attend the 2002 Academy Awards after the film was nominated in the documentary category. The filmmakers have also created an educational package for peace education programs; it contains a copy of the DVD and a 50-page discussion guide with lesson plans correlated to the DVD chapters, classroom activities, reproducible student worksheets, background and historical information, and more. For more information and to see the special rates for nonprofit organizations and religious institutions, visit the official site. 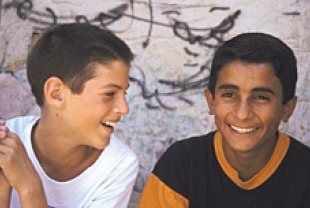