Directed by Laurent Cantet
The involving French film which vividly conveys the soul-shattering debilitations of unemployment and the need to survive while adrift in the universe.

Many people who lose their jobs feel totally adrift in the universe, wracked by anxiety and feelings of worthlessness. Unable to provide for their loved ones and denied the chance to make good use of their talents, they feel disconnected. It takes great patience, creativity, and resilience to survive this ordeal.

When Vincent (Aurélien Recoing) is fired from his job in corporate affairs, he is so ashamed that he doesn't even tell his wife, Muriel (Karin Viard). Instead, he drives aimlessly around in the countryside, sometimes spending the night sleeping in his car. He so desperately misses work that at one point, he wanders into a business building with some other employees, walks down the hall, observing all the filing, phone conversations, people at their desks working, and staff meetings. After sitting for a while in the lounge area, Vincent is ordered to leave by a security guard. Here "being on the street" is a social stigma; he misses being on the inside where things are happening.

Laurent Cantet who directed Human Resources is at the helm of this riveting portrait of a man cut loose from his moorings. Pressed by his father (Jean-Pierre Mangeot) and mother (Monique Mangeot), Vincent tells them he's taken a new job in Switzerland as a U.N. consultant, involved in Third World projects. His father generously gives him money for an apartment in Geneva. Of course, it's all a lie.

Unable to continue doing nothing, Vincent comes up with an investment scheme. Much to his surprise, several friends give him their money with hopes of a big return. Then he links up with Jean-Michel (Serge Livrozet), a veteran wheeler dealer who sells fake luxury goods.

Cantet draws out a bravura performance from Recoing whose conscience kicks in when he realizes how deeply his lies have hurt his wife and oldest son. This involving French film vividly conveys the soul-shattering debilitations of unemployment and the spunk needed to survive while adrift in the universe. 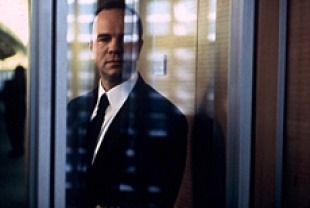