Directed by Bryan Singer
A classic in the crime drama genre filled with references to the idea of evil forces.

While you are watching The Usual Suspects you'll understand in your bones why this film is already heralded as a classic in the crime drama genre. A wily cop-turned-criminal (Gabriel Byrne) meets four other men in a line-up and then reluctantly joins them in several dangerous but profitable robberies. His partners include violent Stephen Baldwin, wise-cracking Kevin Pollack, Latino druggie Benicio Del Toro, and crippled Kevin Spacey.

The brilliantly inventive and consistently suspenseful screenplay by Christopher McQuarrie is filled with both gritty details of the world of crime and references to the idea of evil forces. At one point, the Kevin Spacey character notes, "The greatest trick of the Devil was to convince the world that he didn't exist." Right. This film directed by Bryan Singer is clever, cunning, and absolutely riveting from start to finish. 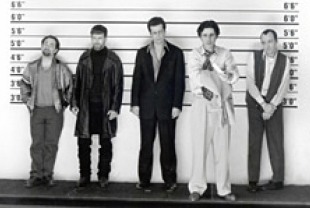